Remarkably, conventional front side PALs effectively bumped the add power at the near reference point and introduced unwanted cylinder power, due to the effect of uncompensated oblique aberrations experienced at the NRP. PALs require the eye to move down, away from the optical center of the lens. We learned in Part 1 how oblique aberrations occur when the optical axis or line of sight forms an angle to the lens optical center, such as when the eye drops away from the center to focus at the NRP. This uncorrected oblique astigmatism at the NRP increases the effective add power experienced by the wearer. 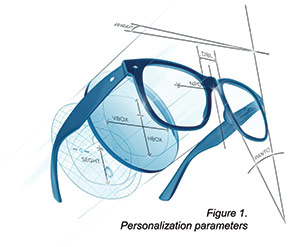 FIG. 1 The implementation of free-form technology in the lens manufacturing process, which allows point-by-point tailoring of the lenses has enabled ophthalmic lens designers to develop PPLs by varying power distribution on the back surface of the lens to minimize oblique aberrations.3-4 Also, lens designers offer mathematical software permitting further improvement of PAL designs that are now personalized according to user position of wear parameters and frame dimensions.5-6

Free-form compensated designs correct the oblique aberration, and the patient experiences the actual add power, as the eye doctor prescribed, at the NRP. What happens when a patient switches from a conventional lens, with an effective bump in add power to a free-form lens with the actual power at the NRP? And here’s the rub, ECPs and lens manufacturers often default to upping the add in this scenario, but is this a good or necessary thing to do?

The debate: Does the patient prefer uncompensated oblique aberrations at near and the resulting bump in the add power, or do they prefer the free-form compensated lens in the near zone and the actual prescribed add power? IOT optical engineers and scientists noted that ECPs and lens manufacturers worried that patients might complain because of the actual add power experienced in free-form PAL (Fig. 2) when users switched from front-sided progressives to free-form. The concern is further amplified by lensometer power readings that are higher at the NRP for conventional versus free-form. To determine the satisfaction of wearers experiencing overcorrection at the NRP versus the actual prescribed add at the NRP, IOT conducted a prospective observational doubled masked study on presbyope subjects who were experienced PAL wearers. Results published in an IOT white paper titled “Influence of Near Overcorrection in Subjective Satisfaction in Wearers of Progressive Addition Lenses.” The authors of the study are Subero M, Cleva JM, Chamorro E, Alvarez M, Alonso J, Indizen Optical Technologies S.L., Spain. 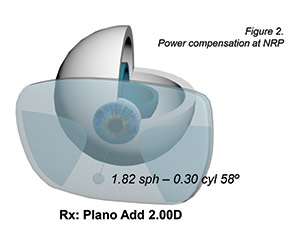 Purpose: To compare the performance of identical personalized PAL designs with and without overcorrected addition power at NRP and determine the effects on wearer satisfaction.

Two personalized PAL of the same progressive design was tested. The CL-Control lens had the prescribed near addition power as determined by the ECP during the refraction, and the OL-Overcorrected lens had an addition power of 0.25D higher (Fig 3.)

Stage 1: First Impressions Evaluations
Quantitative scores (scale 0 to 10) of the general performance of each design given by wearers; after testing both lenses while performing specific indoor and outdoor tasks.

The authors of the study conclude that overcorrecting the add power in PALs shows no advantage. In contrast, PALs with the correct add power at the NRP resulted in better first impressions by the wearer and were preferred by wearers for distance vision and viewing electronic devices.

FIG.3
Control lens with actual add at NRP versus Overcorrected Lens at NRP. All statistical tests were performed using Statgraphics Centurion XVI.II software with a significance level of p-value <0,05
Read the other stories in this series:
Part 1: The Effect of Oblique Astigmatism on PAL
Part 2: Objective measures and subjective measures used by IOT in analyzing lens design performance
Part 4: IOT Free-Form Insights