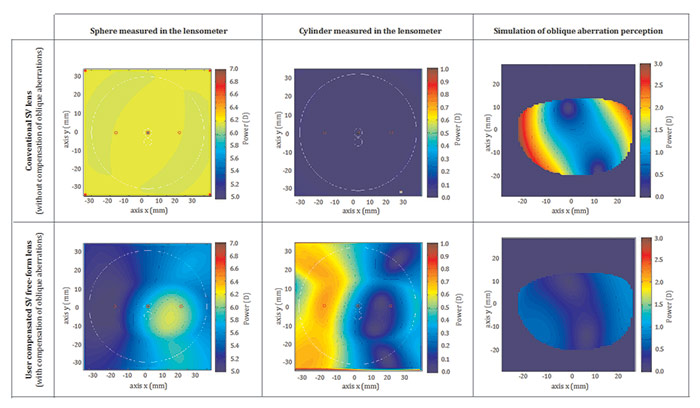 In “IOT Free-Form Technology Insights – Part 1” (20/20 May 2020 issue), we learned about oblique lens aberrations from the optical engineers and scientists at IOT, including how these optical errors influence lens performance, and how the IOT free-form lens design software algorithms compensate these oblique aberrations point by point on the lens back surface, for both SV and PAL designs.

Now we will learn about objective measures and subjective measures used by IOT in analyzing lens design performance. The following is an explanation of the theoretical testing and clinical wearer trial results, in the words of the scientist at IOT, Chamorro E., Alonso J., Cleva J.M., Crespo D. (“Free-Form Lenses: Why My Patient is Not Wearing My Prescription?” JOJ Ophthal. 2017; 2(1): 555577. DOI: 10.19080/JOJO.2017.02.555576)

Theoretical and clinical analyses have demonstrated the compensation of oblique aberrations to improve the visual quality and increase in patient satisfaction.

Theoretical analysis of user perception (modeling) A theoretical analysis can be done by modeling both lens-eye and lens-lensometer systems by means of exact ray tracing. A dense grid of points is created on the lens, and the power at each point is computed for both systems. The results can be compared by sphere and cylinder maps, which show the power measured by the lensometer and the power perceived by the wearer. For example, in Fig.1, a comparative theoretical analysis is presented of a user compensated SV free-form lens and the corresponding conventional SV lens. The lens has a refractive power of +6.50D, produced with a base curve of +8.00D and fitted in a frame with a wrapping angle of 15 degrees, a pantoscopic angle of 8 degrees, and a back vertex distance of 14mm. As expected, the lensometer power reading is constant (both sphere and cylinder) all over the surface of the lens. However, the cylinder of the user-perceived power grows above 2D at both the nasal and temporal sides as a consequence of the strong oblique aberrations produced by this combination of power, base curve and tilts. The area without significant aberration is reduced to two points in the central area of the lens.

RANDOMIZED DOUBLE-MASKED WEARER TRIALS
Wearer satisfaction is the ultimate test of lens performance. Ultimately, the patient determines if these lens improvements are discernible and better. Wearer trial data (Fig. 2) demonstrates that the majority of the patient’s satisfaction ratings are higher in SV and PAL lenses that have been user compensated to reduce oblique aberrations with free-form, digital technology over conventional molded lens design.

The following is an explanation of the clinical wearer trial results, in the words of the scientist at IOT, Chamorro E., Alonso J., Cleva J.M., Crespo D. 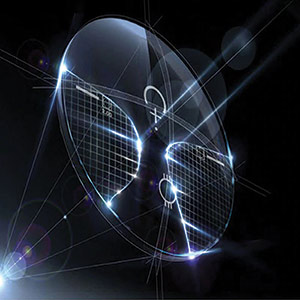 FIG. 2 Digital Ray-Path Technology is based on an advanced three-dimensional calculation model that takes into account the actual position of the lens and the natural movements of the human eye, resulting in an innovative lens that is personalized for the individual wearer and provides better vision in all zones of the lens

The performance of user compensated SV lenses was tested in 22 subjects between 18 and 40 years of age. Refractive errors were between +4.00D and -8.00D with astigmatism lower than 2.00D.

Patients were asked to wear two different pairs of glasses over a period of time and select their preferred choice. Tested lenses were: 1) A conventional sphero-cylinder SV lens using a standard base curve selection, and 2) A free-form SV customized for each patient and produced with the flattest possible curve. Results showed a clear preference for free-form lenses: 68 percent of patients selected free-form SV lenses, 27 percent selected conventional, and 5 percent did not perceive a difference between both designs.

You have heard many of us tell you to trust the computer, relative to digital free-form lens design and manufacturing. This article shows the objective and subjective results of the IOT LDS algorithms on lens performance compared to conventional molded lens design. This theoretical and clinical data helps us feel confident when recommending digital lenses from leaders in free-form technology like IOT.

The video on the IOT website (digitalray-path.com/home/) aided by excellent graphics, demonstrates simulation modeling to help you visualize the refraction of light beams incident on the front and back lens surfaces for all gaze angles and viewing distances. You will see the effect of modeling the beam refraction to direct the beam to the fovea of the retina to form a crisp, clear image.
Read the other stories in this series:
Part 1: The Effect of Oblique Astigmatism on PAL
Part 3: Bumping the Add Power in PALs
Part 4: IOT Free-Form Insights