Dispensing with the niceties (haha, optical pun!) of a long-winded, winding and witty introduction, I’m just going to get right to it. After all, we all know why we’re here: This is the Blue Blocker crucible, where lenses are ground down and only the truth remains. This month, I’m going to turn my attention to the back surface of the lens (and I’m really hoping that phrase replaces “flip side of the coin” for we in the optisphere): What AR to give cash-pay patients purchasing bargain eyewear, who wants to protect his or her eyes from HEV but only wants the most basic lenses available?

For that need, our office has turned to Nassau 24/7’s Blue Shield lens. It’s readily available and cost-efficient, and, looking at the absolute bare bones of it, it does the same thing that other blue-blocking ARs do (the same way that a Pacer and a Chrysler 300 both get you where you’re going). My vision through it is, generally speaking, about as good as my vision through other ARs, though there’s a sort of light-enhancement that seems to wash out colors and make fluorescents seem a little bit brighter; I can actually imagine this being a positive for many patients. It also comes in polycarbonate, making it great for kids as well as the elderly. 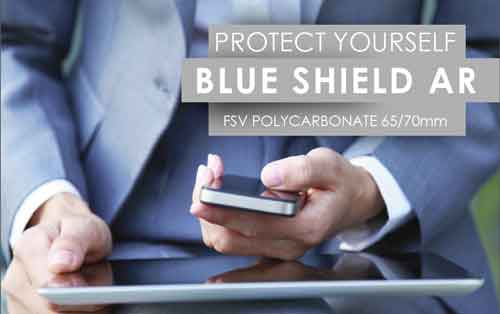 However, there are a few drawbacks to the lens that any practice should be aware of before considering recommending it. For one, while Blue Shield is available in Poly, it is not available in Trivex (my go-to material) nor can Transitions be added to it. It does smudge easier and gets dirty easily (though, surprisingly, I actually found it quite easy to get clean with a lens cloth). Perhaps the biggest factor in my not placing Blue Shield on a higher pedestal, though, is the residual coloring. Even wearing the lenses, I was constantly aware of some sort of strange coloration just out of the corner of my vision; when looking at myself in a mirror, in a photo, or teleconferencing on my webcam, the reflection was quite noticeable. It’s actually that last instance—on my webcam—that made me really step back and consider how apparent the bluish cast was to Blue Shield. After all, Skype, Facetime, and other video-based communications platforms are quickly becoming the norm for individuals keeping up with one another both personally and professionally; who wants to have a conversation with someone whose eyes have been replaced by two big, bright, glowing rectangles? 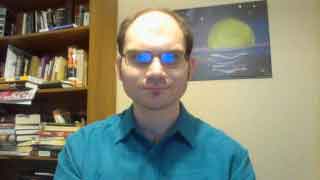 All of this may make it sound like I’m speaking badly about Blue Shield, but, I’m really not. It’s an affordable lens for both your practice and your patients and I feel that it really does have a place in any dispensary as a way to get patients the protection afforded by the blue-blocking experience when they don’t want to pay for a higher quality. It is, however, important to explain there will be a blue reflection on the lenses to your patients to prevent disappointment. For those patients, I wholeheartedly stand behind Blue Shield as a cost efficient means of protecting your patients’ eyes.