And so we move forward, on to part three of my groundbreaking series on blue blocking lenses, a collection of thoughts and observations that will sure to become part of optical lore and studied by apprentice opticians years down the road, once we have reached the age of flying cars and pointed shoulder pads.

While I’ve looked at general purpose lenses the past couple of go-rounds, this time I’m going to be taking a look at a more specialized lens: Eye Solution Technologies’ Blu-Tech, brought to ECPs by Hoya. “It’s not for everyone,” says Greg Cummins, a Hoya lens guru who’s been in the optics field since 1973. “This is a lens for intensive blue light exposure.” Indeed, the very appearance of the lens—made of a unique, 1.56 index material— lets the wearer and everyone around know that this is not a lens for all day, every day wear. Thanks to a melanin component layered into the lens, the lenses appear to have a faint yellow cast to them, comparable to champagne. The concept behind the lens is a unique idea of “taking one for the team:” It’s currently believed that the process whereby blue light damages the eye involves a layer of melanin in the retinal pigment epithelium layer. This layer attracts and absorbs the energy of blue light, which then causes the formation of lesions (for a more in-depth and better articulated discussion of this process, please see “Balancing the Blues” by Dr. Cheryl G. Murphy in the January 2014 issue of 20/20, available here. By layering a melanin component in the lens, it acts as a decoy of sorts, filtering harmful blue light before it can reach the eye—essentially acting the same way as a nuclear sclerotic cataract. The result is a lens that “offers a broader spectrum of protection than Recharge,” says Cummins. 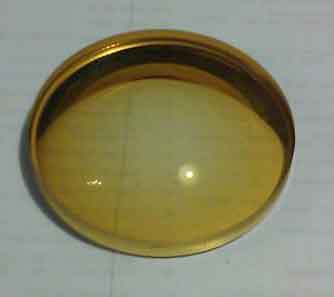 Looking through the lens is pretty soothing, though it doesn’t have the light-heightening effect that a standard Yellow #3 lens might. The best analogy would be to think of the sepia tinting in the opening and closing sequences of The Wizard of Oz—it sort of makes everything look like that. The effect is pretty relaxing in front of a brightly-lit computer monitor, as it helps to maintain the high-contrast of black-on-white while relaxing the eye at the same time. It’s worth noting, though, that the melanin component that makes Blu-Tech what it is isn’t a typical AR; while the color of the lens does reduce glare and reflection somewhat, I can still pick up some residual, and for others looking through the lens, there’s some reflection on the lens surface. For the full benefits of an AR treated lens, it’s recommended that an AR be added to any Blu-Tech lens.

As I mentioned earlier, Hoya points out themselves that this isn’t a lens for all wearers, and certainly not a go-to for your office in the way that other Blue Blocking ARs might be. “This is for your gamers and your engineers,” says Cummins. “People who spend their lives in front of a screen.” (A note on the “gamer” recommendation: Myself, as well as other members of the video-gaming community, have actually been nascently aware of this concept for some time, though I didn’t have any idea of the concept behind it. “Gamer glasses” have been being sold to the gamer community for years now, in the form of plano glasses with a lens tint nearly identical to the color presented by Blu-Tech). Indeed, while there may be a broader range of coverage from blue light, most wearers will probably be put off by the color of the lens, and the implications that might have in social settings or business meetings. I’ve mentioned in previous articles wearers having some issue with the residual yellowing of lenses in traditional blue-blocking ARs; with Blu-Tech, there’s no residual about it: The lens is colored, period. Nonetheless, for your hardcore gamers and truly dedicated techies, I think that Blu-Tech has its’ place in any dispensary as an alternative for those unconcerned with cosmetics who would really benefit from an extra “insurance policy” when overexposing their eyes to heavy doses of blue-light.