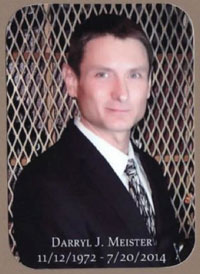 Introduction
As I write this article, more than a month has passed since I learned of the sudden and unexpected death of my friend and colleague Darryl Meister. The impact of his death to the optical community (which he loved and served so effectively) has not been fully recognized. My company, Carl Zeiss Vision, where he (and I) have worked received an unprecedented outpouring of condolence emails, letters and phone calls from all around the world. He made so many friends and contributed so much to the optical industry.

On August 24-26th I attended the ANSI Z80 Standards meetings, which was a first opportunity for many friends and colleagues to meet and share remembrances and acknowledge his contributions in this field. At the ANSI Z80.1 meeting, many of us recalled our dealings with Darryl and expressed how much he would be missed. The ANSI Z80.1-2015 revision is in its final stages of preparation. We agreed in that meeting to include his name in the credits; while he had not attended recent meetings, his mark is found throughout the standard and we all wanted to include Darryl as an important contributor to this re-write.

First Meeting
I have known Darryl since 1999; we've worked closely together since then. Some of our dealings were with AO/SOLA/Zeiss issues (companies we both worked for). I also had many dealings with him on industry standards work, as I will explain more in this article.

The first time I met Darryl, he attended an OMA (now The Vision Council) meeting in Orlando, Fla. I did not realize at the time that he was only 27, for his knowledge of ophthalmic optics (especially at that young age) was very impressive. At the time of this first meeting, his former wife accompanied him. I was also traveling with my wife, so we spent some time together after the meetings as well. This helped to establish our friendship on a social level beyond work. 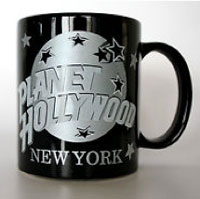 We often met at industry meetings and spent evenings together in various cities around the country. A part of the experience of eating dinner with Darryl was finding places he did not mind eating. Darryl was not thrilled with many of the restaurant choices that were popular and was picky about where he would eat. Darryl did enjoy going to Planet Hollywood restaurants whenever possible. He enjoyed the style of food and he also collected Planet Hollywood mugs. I remember being with him in at several Planet Hollywood restaurants where he purchased them: Miami, Las Vegas, New York, and Orlando to name a few.

Introduction to Spectacle Optics
Not long after Mark Mattison-Shupnick hired Darryl at SOLA Optical, the publication he co-authored with Dr. James Sheedy titled "Introduction to Spectacle Optics" was published. The first edition was printed in July 1999 and has been reprinted by SOLA and now Zeiss many times since. It is a great resource and I have often referred to it thru the years. I recently gave a seminar on Ophthalmic Optics and provided this in resource in digital form to the 35 people who participated. It has proved to be a very useful reference for me and many others interested in this field.

Spectacle Optics Program Available for Free—Download of Darryl's Terrific Program
Not many years after the publication of his book, Darryl showed me a program he was working on that I found tremendously clever and useful. It ultimately was provided free of charge and I have included his last version rev Oct 2013 on this link to the Optical Heritage Museum website. 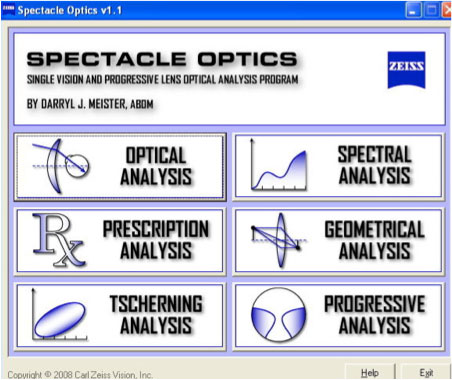 As can be seen by the main menu, there are many sections to this powerful utility program. It permits one to learn the basics of ophthalmic lens design by seeing how off–axis performance errors are influenced affected by base curves, lens surface type, viewing angles, center of rotation distance, etc. The spectral analysis section comes pre-loaded with the properties of many spectacle lens materials and their transmission properties.

Other optical tools shown provide invaluable basic analysis options for that permits the user to learn interactively. I highly recommend checking this out. I recall talking to Darryl last year when he indicated he spent some vacation time working on a revision to this program. His love for this type of work was apparent to all who knew him.

His Influence at ANSI Z80.1
As mentioned earlier in this article, I got to know and work with Darryl first when we both attended Industry meetings. In 1999, a major re-write to ANSI Z80.1 was published and his mark was shown in this document. This was the first time his name first appeared in the credits for this revision, an incredible achievement for such a newcomer.

He helped craft improved language in the area of prism and prism imbalance, and provided drawings used in this and subsequent documents.

Another major ANSI Z80.1 improvement that Darryl was responsible for appeared in the next revision of ANSI Z80.1, which was published in 2005. For several years previously, Darryl and I along with others on the Lens Technical and ANSI committees examined the optical effects of cylinder axis errors for weak cyls (ie- 0.25D). This work, and in particular Darryl's position paper recommending a relaxation from 7 to 14 degrees, convinced experts at ANSI (and ultimately ISO for 21987 mounted pair standard) to change tolerances. To see more on this topic, see item 2 on this link and download Darryl's paper here.

Recent Impact of Darryl's Work at ISO
In June 2014, I participated in ISO TC172/SC7/WG3 spectacle lens meetings in London. While Darryl never directly participated in these meetings, because he disliked the negotiation process required, his influence at this level was most apparent. I am a member of a committee working on an ISO Free Form technical report committee. The business dealings I had with Darryl involved a 20 page technical paper he wrote on this topic.

The ISO Free-form Technical report committee has been working for over one year to compile technical information on many aspects of Free-form. This work has been controversial and also difficult to gain consensus in the industry. At June 2014 ISO meeting Darryl's paper was presented to the committee and it was very favorably received. His work actually proved to be a breakthrough in this effort. The respect Darryl had earned over the years among committee members helped in their acceptance of Darryl's work. It is expected to be the fundamental document from which the finished ISO Freeform Technical Report will be crafted.

At the same series of June 2014 ISO Meetings, I presented another contribution from Darryl, The Vision Council Lens Technical Committee (LTC) completed work, to define "position of wear" parameter definitions. He was the primary author and his "signature drawings" were particularly useful in conveying the exact meaning for these terms. This work was approved at the LTC in March. This work is expected to appear in the next ANSI A80.1 revision n 2015, and hopefully in future ISO 13666 definition standards.

Other Contributions
Darryl's love for optics has been visible for years on Outboard, and he was a very popular speaker and teacher. I am sure I have not captured all of his many contributions to our industry in this article, but hope I helped indicate how valuable his work has been. He will be missed as both a friend and colleague.

Contributions In Memory of Darryl
Shortly after his death, an on line collection was established for Darryl's children, Korey and Samantha. The purpose was to support them by alleviating some of the financial burden of continuing their College Education. If you would like to contribute to this fund you can find this page using the following link: gofundme.com/by2nzc.