Last year, I briefly profiled the glasses of US President Dwight Eisenhower, comparing and contrasting his frames, fashion, and sensibilities towards eyewear to LBJ, whose unexpectedly extensive frame collection I took a look at in the November issue of 20/20. I’m happy to say that, to my surprise, just a few days after the first article went to print, I received a phone call from Michael R. Florer, the curator at the Eisenhower National Historic Site in Gettysburg, PA. As it turned out, the former president’s own eyewear collection, although nowhere near as large as LBJ’s, was nonetheless somewhat larger than first anticipated. While my original article was able to account for three pairs of glasses—one in his possession at death, a translucent gray zyl pair that also pops up in some of the more famous photos and addresses Ike gave; a perfectly round zyl pair; and a wire/rimless pair for golf—Mr. Florer helpfully provided information that can now raise that total a bit. 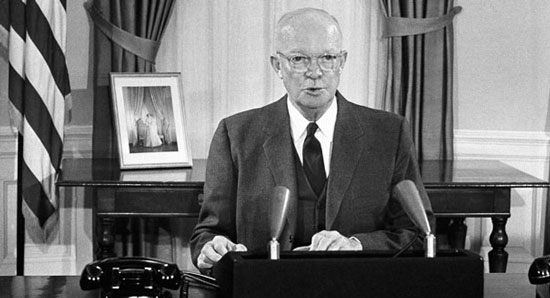 A pair of broken tortoiseshell glasses was found among Mamie Eisenhower’s possessions after her death in 1979, ten years after Ike’s. The glasses were found in a vanity in Mrs. Eisenhower’s dressing room, in a brown leather case marked EDMONDS. Though it cannot be 100% confirmed the glasses weren’t hers, the size and design have led Florer to conclude they belonged to the former president. A keepsake, perhaps? The style is certainly in keeping with Eisenhower’s taste. Of the three frames I was previously able to account for, two were round, and one of them may have been tortoiseshell, as the black and white photo makes it difficult to tell if some white marks across the frames are patterning or simply reflection from the camera flash. And the design is much more in keeping with the sort of frames a traditional, conservative male glasses wearer would’ve chosen pre-1969, versus a woman in the late 1970s. (Unfortunately, after a brief discussion with Mr. Florer about ways to validate to whom the glasses belonged, it emerged that the museum has no lensometer of its’ own nor access to one to scope the lenses. Any history buffs reading this want to be of assistance?) 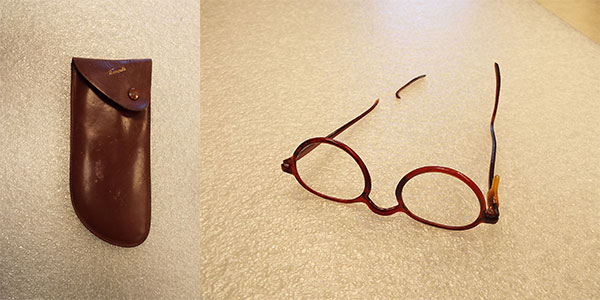 On the funkier end of the spectrum is a piece of period technology that reminds us the concept of “as seen on TV” gadgets wasn’t born in the 1980s. In his possession at the time of President Eisenhower’s death were these fantastic Bed Specs, with paperwork indicating he received them in 1967, about two years before he died. Bed Specs offer a theoretically brilliant solution to a particular problem: How to comfortably view the television while lying down without the interference of a multifocal segment. Worn on the face of someone lying completely horizontal, the Bed Specs induce prism that gives the wearer comfortable vision, as though he or she were sitting up. Although the trend obviously didn’t take off—let’s be honest, how many of you reading this stocked them in YOUR dispensary?—it’s worth noting that Eisenhower apparently used his enough for there to be signs of wear, including a broken nosepiece.

Such a small, seemingly crazy little gadget, but one that, coupled with its’ use, provides a fascinating glimpse into the life of the person who owned it. Just as it was probably a strange image for many readers to consider LBJ contemplating his vast eyeglass collection, it’s probably equally as surreal to picture Eisenhower, in his twilight years, laid back in bed with a piece of Star Trek equipment strapped to his head, reading the news or watching TV. More likely he considered it an advanced technology enhancement that helped him maintain his comfortable quality of life?