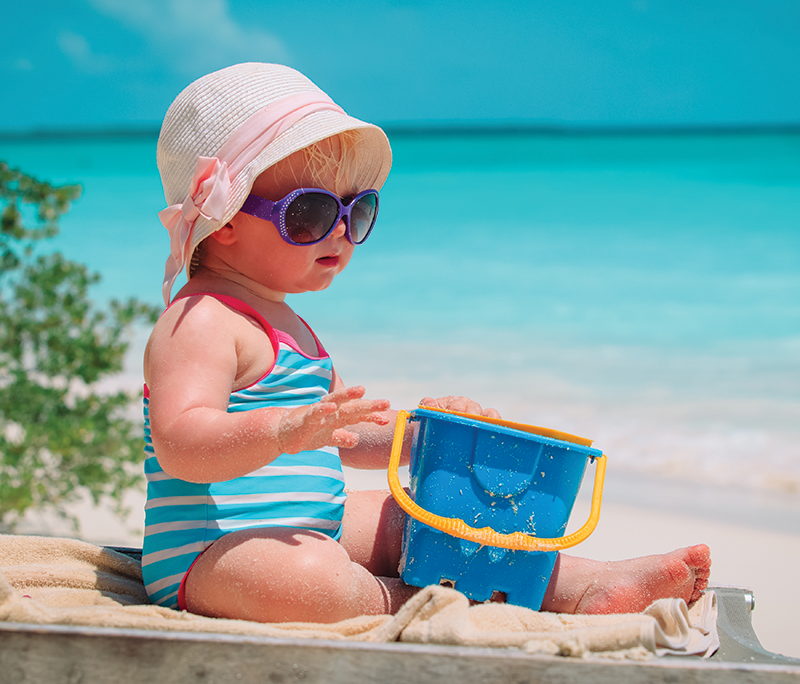 It has been known that the sun can cause damage to the eye and vision for millennia. As early as 360 B.C., Socrates warned, “People may injure their bodily eye by observing and gazing on the sun during an eclipse.” Galileo suffered visual loss from his studies of sunspots, and Sir Isaac Newton described a retinal visual scotoma and visual afterimage that persisted for days as a result of observing the sun directly through a telescope. While it seems ironic that the light we need to see can also be harmful, it’s true. Damage to the retina from sunlight initially was thought to be exclusively thermal, and while protecting the retina against thermal damage is important, researchers believed there was another component. In 1966, research by Noell et al., distinguished two types of retinal damage from sunlight, thermal and photochemical. Photochemical cellular damage is caused by reactive forms of oxygen (free radicals) while thermal cellular damage is caused by denaturation of proteins.

Photochemical damage is thought to be the most common cause of retinal damage from sunlight. Damage is believed to result from the exposure of retinal tissue to generated free radicals. While the retina has mechanisms to protect against injury, it is thought that damage may occur once these protective mechanisms have been overcome. Photochemical damage is associated with both long-duration exposure times as well as shorter wavelength (higher energy) light exposure.

Radiant energy causes excitation of electrons from the “ground state” to the “excitation state.” However, the excitation state is unstable and can lead to the formation of free radicals. Free radicals can attack many molecule types, causing damage. While melanin in the retinal pigment epithelium (RPE) absorbs scattered light to reduce the stress from free radicals, the cumulative effect of exposure to sunlight and UV light in particular bleaches the pigment, reducing its efficacy. The retina is then vulnerable to damage from free radicals.

Photochemical damage to the retina increases the risk of macular degeneration. This leading cause of vision loss among people aged 60 and older involves the breaking down of the macula, which is the central portion of the retina. But photochemical damage extends to other ocular structures as well. The World Health Organization (WHO) lists the following potential acute and chronic effects of excess UV exposure to the eye. Acute: acute photokeratitis and conjunctivitis; acute solar retinopathy (from staring at the sun—occurs most often when viewing a solar eclipse without proper lenses). Chronic: climatic droplet keratopathy; pterygium; pinguecula (benign permanent unsightly growth that can affect normal tear film distribution and interfere with contact lens wear); squamous cell carcinoma of the cornea and conjunctiva; cortical cataract; ocular melanoma; macular degeneration. Eyelids and periorbital skin: photo-aging of the eyelids; skin cancers of the eyelid.

Many of us would argue that we always recommend sunglasses for UV protection outdoors. Fact: Quality polarized sunglasses are an excellent choice for outdoor protection from UV, but studies show that only 1 in 4 people consistently wear sunglasses outdoors. Another VisionWatch survey of 10,000 adults aged 18 and older found that only 31 percent reported wearing sunglasses all the time outdoors, and they reported that the percentage of their children who wear sunglasses all the time is only 7.6 percent. According to studies by Glickman et al., UVR transmission to the retina varies with age. A child’s retina receives upwards of 70 percent more UVR than an adult. Research indicates that babies are virtually defenseless against the higher dose of UV their eyes experience due to their large pupils and crystal-clear lenses combined with deficient antioxidant protection levels, according to Billy Hammond et al., (“Oxidative Photodegradation of Ocular Tissues: Beneficial Effects of Filtering and Exogenous Antioxidants”).

It is essential that ECPs recommend optical quality and prescription sunglasses to all patients. Lenses need to be large enough to cover the eyes completely; this prevents as much light from entering the eye as possible. Wrap sunglasses are an excellent option. Darker lenses, in particular for light sensitive patients, provide more protection than lighter fashion tints. Mirror coatings add another layer of protection, and of course, sunglasses must have 100 percent UV protection.

As eyecare professionals, it is important that we raise our patient’s awareness of the facts. Protection from UVR for both the skin and the eyes is cumulative and should start with babies. Also, remember that we need to protect our anterior and posterior eyes from these high energy wavelengths to avoid damage to ocular cells and tissues.