In a recent Opticians Handbook article, I discussed the topic of reference wavelength. A key aspect of understanding reference wavelength dealt with differences in refraction properties of various materials for different wavelengths of visible light. Specifically, in the presence of prism, “white light” is broken up into the familiar rainbow. In general, the higher the index of the material, the more these colors are observed because of the material Abbe value.

The purpose of this article is to give the reader a feel for how this attribute impacts vision. A better understanding of the influence of Abbe number on vision is useful when explaining material benefits vs. optical drawbacks to those considering their lens material choice options.

The name for the optical term Abbe comes from the famous Carl Zeiss physicist and co- founder of Schott, Ernst Abbe. 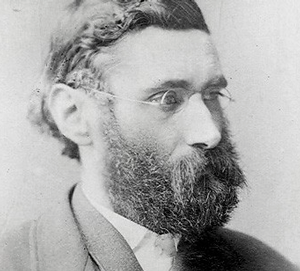 The Abbe Value (sometimes referred to as v value) is defined by the relationship of material indices measured at the yellow, blue-green and red light “reference wavelengths” 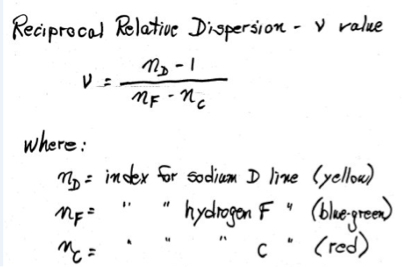 Most commonly used ophthalmic plastic lens materials have Abbe values between 30 and 58, the higher the number the better optical performance. Polycarbonate is the worst performing commonly used plastic, having the lowest value of 30. 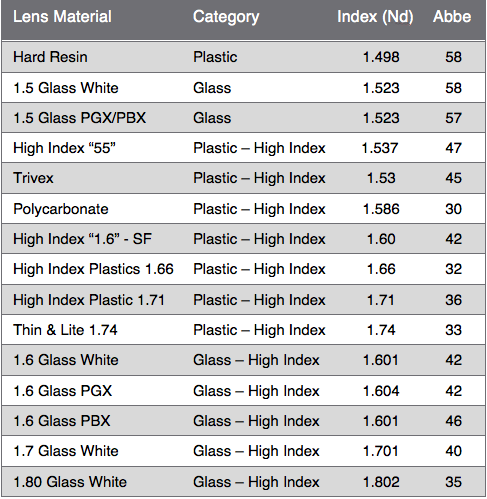 As a general approximation, material index vs. Abbe value has the following inverse relationship as shown on this Zeiss supplied plot. Some materials, like polycarbonate, do not lie on this curve as shown. 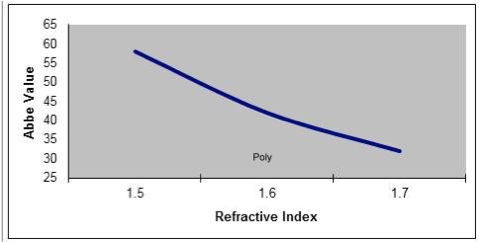 Lateral color has a relationship to Abbe value (v) as explained below.

My father Don Whitney, who joined AO in 1947 and worked in American Optical Lens Design, wrote a paper on the significance of Abbe Value in 1992, excerpts are below.

He stated that the primary significance of Abbe number (v- value) in ophthalmic lens design is that it affects the amount of lateral chromatic aberration encountered by the patient during off-axis viewing. As shown in the equation above, Abbe value is a reciprocal function of lateral color. It turns out that this aberration adds to another optical error and degrades optical visual acuity as simulated in the image at right.

Don Whitney recounted in his paper: “Until the late 1950s, little attention was paid to lateral color by the ophthalmic lens designer, except for the introduction of barium segment glasses to reduce chromatic aberration in fused multi-focals. This is because it was felt that nothing could be done about it; besides, crown glass and CR-39 plastic has such a good Abbe value (58) that lateral color was not a problem except for very high power ranges (i.e. cataract lenses)… In 1958, American Optical introduced its AOLITE aspheric Cataract lenses. The design of this product, spearhead by John Davis, was the first to take into consideration the fact that lateral chromatic aberration acts on the tangential meridian only.”

At this point, it should be noted that some companies have made claims that their designs have reduced the amount of lateral chromatic aberration resulting from the materials Abbe value. While designs can minimize other optical errors, any lens with a specific amount of prism will have the same amount of color error for the material the lens is made from. This component of color cannot be altered.

“From work done by John Davis many years ago exploring the relative significance of lateral color and power error… we know that 5 Diopters of prism introduces enough lateral color to cause about the same amount of blur as does 0.12 diopters of power error… John concluded that in crown glass (Abbe = 58) six prism diopters will create enough later color blur to be seen. Thus, it may be noticed in lenses stronger than about 2 diopters.”

Experiments that I was involved in at AO in the spring of 1989 as well as research from other publications, came to the general conclusion that the Just Observable Error (JOE) for lateral color to be in the neighborhood of 1/8 prism diopter. Therefore any errors less than this cannot be seen. There is also evidence that when this error is in the neighborhood of ¼ prism diopter (twice the JOE value) it may be bothersome to some patients.

Since most prescriptions do not contain prescribed prism, looking through the design optical center or fitting point will not produce any measurable color error. Remember that for this to occur, prism must be present.

The following plot from Don Whitney’s 1992 paper is an interesting way to examine how the material Abbe Value influences lateral color errors for +3.00, +4.00 and +5.00 Diopter lenses. The Just Observable Error (JOE) is shown at the 0.125 (1/8) Diopter value. Looking at the plots, we see that our +3.00 Lens (bottom curve) would be below the observable threshold for materials of Abbe 50 or greater, and become noticeable for material Abbe values below this number. Our Poly example of 30 Abbe would have 0.2 Lateral color and likely be noticed by most wearers when looking at that angle. 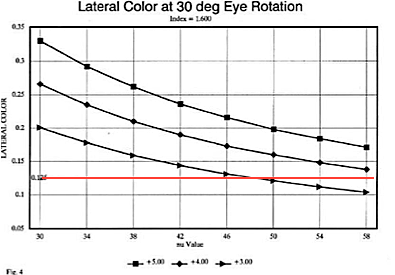 Plus Vs. Minus Powered Lenses

Another interesting aspect of examining lens power and resulting lateral color errors lies in the fact that plus lenses yield more lateral chromatic aberration than minus lenses of identical power. This is because of the front surface curvature and thickness of the lens, which combine to produce more prism (when examined at the 30-degree viewing angle). More prism means more lateral color! The example below illustrates how light rays behave at such an angle.

Path Taken by a Chief Ray at 30 deg. Eye Rotation 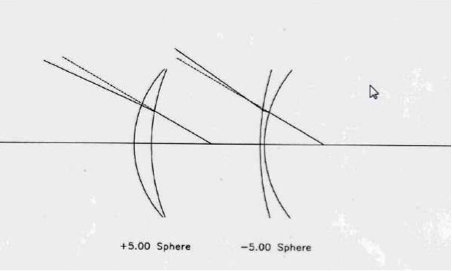 In Summary, we see for a poly lens with Abbe of 30, powers of +4 and above have lateral color errors of more than twice that of our 0.12 threshold. At those levels, some observers would find it bothersome. Since Poly has significant impact protection benefits, it does not mean that is should be avoided for patients requiring these powers. Certainly for powers below 2 Diopters, lateral color will not be noticeable to the wearer. For those powers at 4 Diopters and above, if lateral color is a concern and yet impact considerations are important, materials like Trivex, with an Abbe of 45, is also an option. Providing the patient with feedback on what they may experience is important to provide informed choices for the consumer.

Feel free to contact me if you have any questions or input: [email protected]