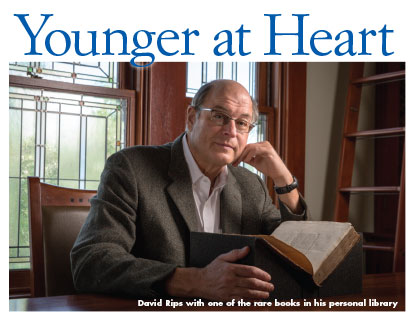 For a young David Rips, helping out in his father’s business Younger Optics, was more than just a way to earn some pocket money. From the age of 8, when he started doing menial jobs at the Younger factory in Los Angeles, Rips was drawn to lenses and their light-bending capabilities. Guided by his father Irving Rips, Younger’s founder and a noted lens designer, Rips immersed himself in optics.

Rips went to work full time for Younger after earning a business degree at the University of Southern California. At Younger, he took on roles in business, accounting, marketing and planning. By 1980, he was reporting on the state of the company at board of directors meetings. He soon became assistant to the president and assistant secretary, then secretary of the corporation and a member of the board of directors. In 1992, he was named president and CEO. He had not yet turned 40.

Under Rips’ direction, Younger has evolved from a family-run company to a professionally-run corporation. The company has steadily grown to become one of the largest privately-held ophthalmic lens manufacturers in the world and a leading supplier of prescription polarized (NuPolar) lenses, Trivex (Trilogy) lenses and Transitions photochromic lenses.

A strong proponent of polarized lenses, Rips has developed educational materials that have helped both labs and ECPs grow their polarized sales. Under his leadership, Younger became a key participant in the development and introduction of Trivex material in the optical industry. He continues to encourage innovative products such as Younger’s Transitions Drivewear and spearheads collaborative projects with optical labs and other manufacturers in the industry. In 2013, he was inducted into The Vision Council’s Optical Laboratory Hall of Fame.

L&T: When did your fascination with optics begin?
Rips: I think I made my first telescope lens at about age 10. It was made from carpet coasters for furniture. I ground and polished it completely by hand.

Do you recall what started it?
Growing up, my father was always talking about optics and lenses, and had converted our garage into an optical laboratory for precision optics. I even used to attend Optical Society meetings with him at a very young age.

At what age did you start working at Younger Optics, and what were some of your earliest jobs there?
Believe it or not, I started probably at around age 8 to 10. I had to do most of the jobs around the shop, especially the “dirty” ones like cleaning out glass centrifuges from the glass generators. My dad was a difficult task master, and if the lenses I made were not up to his specifications, he could get very emotional. I remember one time, he threw a tray of lenses (an entire day’s work) against the wall and docked me a day’s pay! I’m not sure that would fly in today’s world, but it made me learn fast.

Did your father teach you specific concepts about optics and share practical information about lens manufacturing and design?
Absolutely! To make early progressives and seamless lenses, we hand-made metal cams that would trace and guide a lathe that cut ceramic blocks to a progressive curvature, then we would slump (heat, melt and form) a ground lens to the shape of the ceramic block. When plastics first started appearing, we would do all types of experiments trying to cast our first lenses. I still remember having to turn the knob of my mother’s kitchen oven to try to duplicate the suggested lens cycle to make plastic lenses. I won’t even talk about the experiments to try to make IPP, an explosive organic peroxide catalyst!

Did your father encourage you to work at Younger?
Yes and no. He always taught me everything as if I would; however, he also encouraged me to find an easier way to make a living. Making lenses was hard work, especially back then.

Have you ever considered another career choice?
Growing up, in my quest to find an “easier way to make a living,” I always thought I would be a medical doctor. Then I thought being a lawyer/CPA sounded good, but in the end, I wound up doing what I was raised for… running Younger Optics.

What were some of the challenges you encountered when you led the transformation of Younger from a family-run business into a modern corporation, and how did you address those challenges?
Younger, the family business, had to be completely rebuilt into a professionally-run business. I was lucky; I brought in Tom Balch, one of the founders of SOLA USA, to help me do it. To date, that is still my single best decision. At Younger, like at many small family companies, nepotism used to be a problem, where everything was done by a family member. We moved away from that and built a world-class team, so that the company could go beyond the capabilities of the founding family. In the early days, Younger operated out of antiquated buildings that were arranged in a haphazard way. We had to move to a new facility that was world-class. Finally, Younger had to become international, both in terms of manufacturing and sales, to be able to grow and compete in an industry that was getting tougher and tougher.

When did you start collecting antique books?
My dad started collecting in the 1980s. He ran his library much like he did the early Younger, not with a disciplined approach, but going in many directions at once. When he passed away in 2007, he left me his collection, and I have turned it into a world-class library. It’s a similar story to the transformation of Younger.

What are some of the favorite books in your library, particularly books about optics, and what do you value about them?
For optics, above all, stands Newton’s Opticks (1704). In science, the four most important texts of the Scientific Revolution are Newton’s Principia (1687), Copernicus’ De Revolutiomnibus (1543), Vesalius’ Fabrica (1543) and Darwin’s Origin of the Species (1859). I have first editions of the last three; the Principia is still in my target sights.

How do these rare texts, some of them centuries old, inform your outlook on modern lenses and lens design?
Believe it or not, for the most part, lens design is lens design. Earlier scientists such as Newton, Descartes and Kepler, knew a lot about lenses and lens curvatures. It seems that throughout history, lens makers have held a special place in society. Even the philosopher, Spinosa, was a lens maker!

If you could have a conversation about optics with any of the authors represented in your library, who would it be? What would you discuss?
That’s easy—Isaac Newton. He was just so far ahead of his time. He may have had the greatest mind in the history of man. He was intellectually fearless—for example, he tested the effect of the curvature of the eye on sight by sticking a small spoon behind his eye, pushing it forward, to see how it would change his vision! I could discuss modern lens design with him, and I am sure he would not only understand it, but look at it in a unique way and come up with some original ideas. He literally could do anything.

To what extent are you involved in research and development at Younger? What are some of the products that have directly resulted from your input?
Tom Balch, our COO, has more direct involvement in the actual R&D, but we discuss most projects every day, including our recent products like Camber, short corridor progressives, polarized lenses and specialty niches of every kind. I like to think I had some hand in most of them.

As a manager, how hands-on are you?
In marketing and sales, I’m very hands-on. Less so in almost every other area. My favorite responsibility is making sure we are close to our customers.

How do you keep in touch with what’s going on at the doctor and dispenser level?
By visiting them, giving seminars and talking to ECPs. And by visiting small and large labs who are close to their ECPs. I also read almost every word of almost every optical magazine.

Camber Technology is Younger’s proprietary approach to designing and manufacturing digital lenses. What led to its development?
As a lens manufacturer, Younger was watching digital technology very carefully. While there were many advantages to the technology, we felt that the problems associated with moving the progressive from the front surface to the back were being ignored. It is a long-held rule of optics that there is an optimal front curve for every power through the lens. This was built into traditional progressives when the progressive was in the front. Camber incorporates the best of traditional optics and modern free-form technology.

Can any free-form lens benefit from Camber Technology?
Yes. Not so much through the center of the lens, but as you get to oblique angles, then Camber really helps. Of course, the wearer must look through the intermediate and reading zones at an oblique angle, so this is where Camber can really help any design, as long as it has been customized for Camber.

Younger is the owner of IOT, a company that provides exceptional compensated to customized free-form designs. How would you assess the future of the private label opportunity in free-form lenses?
I believe the future is very bright for private label free-form lenses, just as it is for branded free-form lenses. This technology is exploding, and throughout the world, more and more people are becoming able to afford better and more technical eyewear. Add to that the aging population demographics, and I see a great future for both private label and branded products. Each serves a different market segment and each has its appeal. The point is to get the best eyewear on as many faces as possible. Different things appeal to different people.

The lens industry, and optical in general, continues to consolidate. Why does Younger Optics remain independent?
At Younger, we sometimes feel like “The Last Man Standing.” While consolidation is a natural evolution in most industries, there is always a place for those companies that see the world differently. This is especially true in research and development, where its purpose is to find products that “shake up” the status quo. It is hard to do that as part of a larger organization, which by its nature is the “status quo.” Younger’s independence is at the heart of its creativity, both in the way it develops products, and the way it treats its customers.■