L&T takes the pulse of the spectacle lens market with our 2019 Premium Lens MarketPulse Survey. This annual qualitative survey provides fresh feedback from independent eyecare practitioners about their spectacle lens sales as well as their approach to dispensing certain products. The results of this exclusive study indicate which types of lens products are most popular among the 347 independent optical retailers across the country whom we polled. This valuable data can help you benchmark your own lens sales. 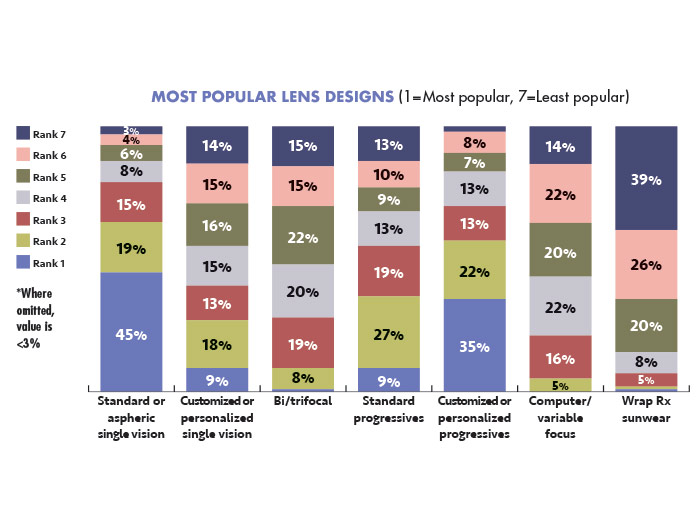 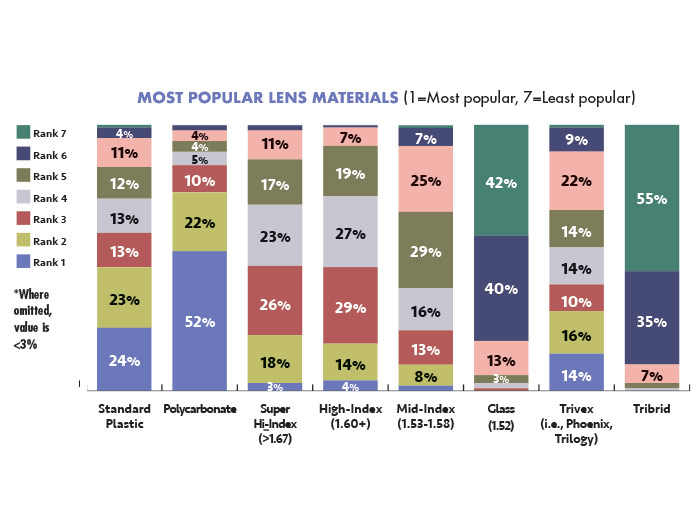 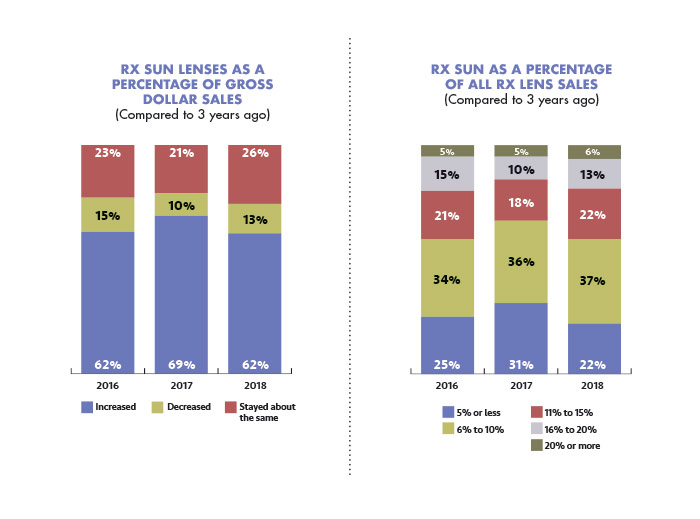 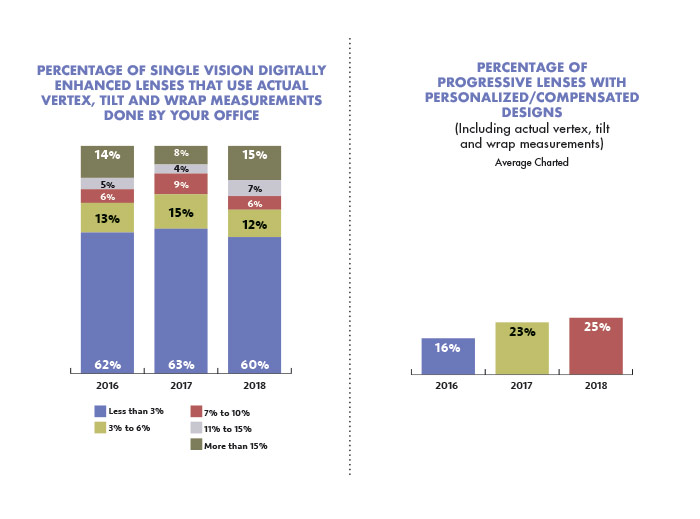 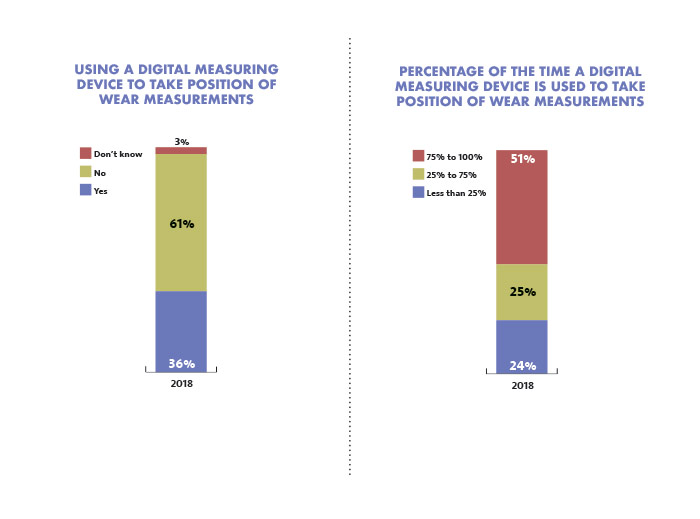 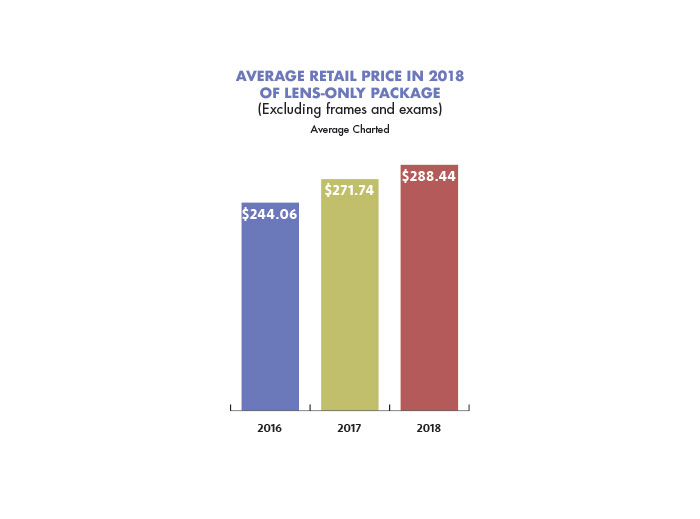 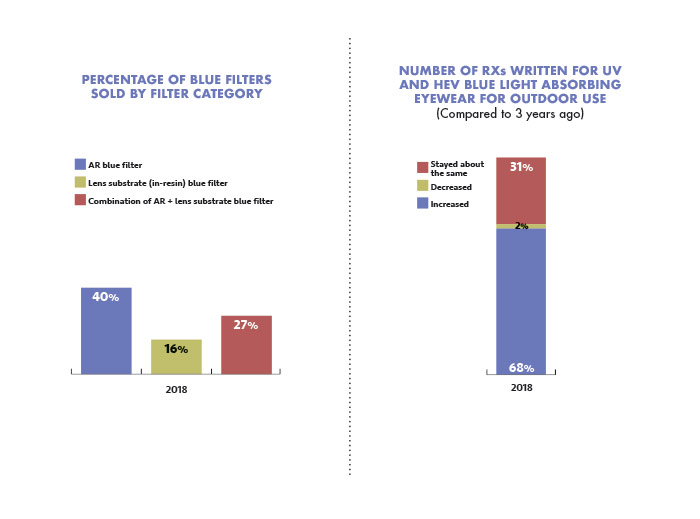 TOTAL SALES
Compared to three years ago, 62 percent of retailers said that spectacle lenses and treatments made up a larger percentage of their location’s total gross dollar sales in 2018. In 2018, 51 percent said pricing on spectacle lenses and treatments has increased compared to three years ago as well, and 50 percent said that Rx sun lenses as a percentage of total dollar sales increased over the same period.

Sixty percent of retailers said less than 3 percent of single vision digitally enhanced lenses use actual vertex, tilts and wrap measurements done in the office by the retailer.

Close to three-fourths (72 percent) of retailers said that customized or personalized progressives lenses made up a greater proportion of their total lens sales in 2018 than they had versus three years ago, and 56 percent said computer/variable focus sales had increased over the last three years, while 31 percent said that sales of bi/trifocals had decreased as a percentage of total lens ales over the last three years, respectively.

COMPUTER/OFFICE LENSES
Almost all retailers surveyed (94 percent) say they determine whether a patient should have computer lenses by their occupation/vocation as opposed to add power.

Forty-eight percent of retailers said that their 2018 Trivex lens sales increased as a proportion of total lens pair sales compared to one year ago. Forty-seven percent said the same about their polycarbonate and super high-index lenses.

Sixty-six percent said that their mid-index lens sales had stayed flat. Glass was the weakest with 45 percent saying that glass made up a smaller proportion of their total lens sales in 2018 than the previous year.

PERSONALIZED PROGRESSIVES
Retailers said that 47 percent of their progressive lens sales are personalized/compensated, on average.

Twenty-five percent of the progressive lenses with personalized/compensated designs include actual vertex, tilt and wrap measurements.

Over half (52 percent) use the manufacturer’s or lab’s default measurements for position of wear (vertex, panto and wrap).

DIGITAL MEASURING DEVICES
Thirty-six percent of retailers said that they have a digital measuring device in their office to take position of wear measurements. Among them, 51 percent say they use it 75 percent to 100 percent of the time.

LENS PACKAGES
Fifty-two percent of retailers say that they use package pricing. The average price of a lens-only package was $288.44.

OUTDOOR EYEWEAR
Seventy-eight percent said they have increased discussions with their patients on the importance of UV and HEV blue light absorbing eyewear for outdoor use, and 68 percent have actually written more Rxs for them in the last three years.

METHODOLOGY
This survey was conducted by Jobson Optical Research’s in-house research staff. This sample was derived from the proprietary Jobson Optical Research database. Data collection was conducted in February 2019. Only the responses of independent optical retailers are included in the report. The 2019 sample consists of 347 independent optical retailers. All participants were recruited by email, and the questionnaire was completed online. Three years of data is provided for comparisons where possible. 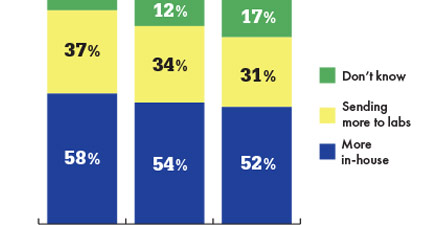 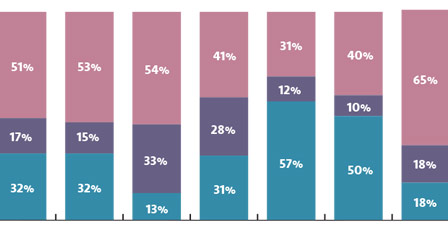