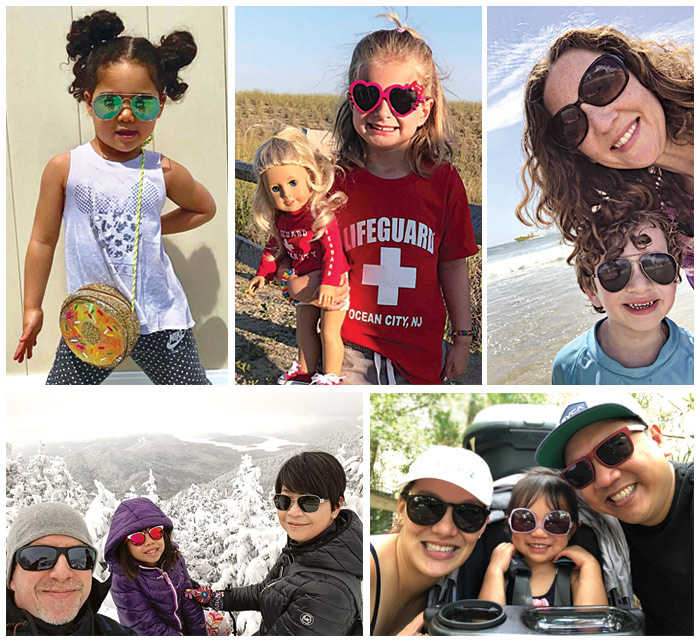 I adore kids in sunglasses. When wearing them, kids instantly transform into the coolest little beings—and they know it, as evidenced by our two street-stylin’ cover models wearing Lafont suns. But we don’t see children in sunglasses nearly as much as we see adults wearing them so when I was assigned to write a column for this issue, I wanted to focus on sunwear for kids.

Rather than discussing the usual “make sure you talk to your customers about sunwear for kids” (which you should continue to do) and quoting sunwear stats from our Children’s Eyewear MarketPulse Survey (pp. 60-62), I decided to take an informal survey on my Facebook page to get real-life feedback from parents regarding their kids and sunglasses. I asked friends and family who have children whether or not their children wear sunglasses while outdoors and if so, do the kids willingly wear them or only if they are asked to, and for those who don’t wear them, their reasons for not doing so. The response was overwhelming—people were eager to share their thoughts and experiences. Many of the responses are consistent with common complaints we’ve heard about children’s sunglasses but hearing them vocalized by people close to me made it more eye opening. On the flip side, some of the responses reveal plenty of kids wear them and love doing it. The good news is overall these responses indicate parents definitely recognize the need for sun protection for their child’s eyes, much more so today than a decade or so ago. The challenge is getting their kids to wear them consistently.

From a professional standpoint, I believe we’ve made significant strides in tackling this challenge—but our work is nowhere near done. I think it’s worth sharing all the responses quoted directly from these parents, so this month, I kicked James Spina out of his usual column spot and claimed this full page for myself. Some of the commenting parents proudly posted photos of their little ones modeling their favorite sunglasses, and they are all so adorable, I couldn’t help sharing them as well. Whether they’re striking a pose or taking a selfie with mom and dad, these kids are basking in the sunwear spotlight.

Robyn: My kids like them at first but then take them off within 10 minutes. The biggest problem seems to be that they put their fingerprints on the lenses and then get them dirty so it prohibits them from seeing well.

Laura: We always try to make sure Evan is wearing either sunglasses or a hat. He recently got some new sunglasses for vacation, and he loves wearing them!

Leah: Grace loves hers. She wears them all the time. We play to her style, so a lot of them are sparkly, princess-themed, etc. But I always check the UV rating.

Kayla: Adeline is almost 2 years old and likes to put them on and take them off on repeat.

Nielsen: My 8-year-old wears them willingly for both function and to look cool. My 4-year-old does it because of his older brother. But usually he has it on for a few minutes and takes it off. He doesn’t really like things on his face.

Mona: My boys have sunglasses but they don’t wear them often. We spend a lot of time outdoors in the summertime, and they prefer to wear their baseball caps. They say it’s “because sunglasses are not comfortable.”

Audrey: August keeps a pair of Ray-Bans in the car because she gets chronic headaches when we drive. It’s not a slam dunk but the shades do reduce the glare/brightness and helps a bit!

Malinda: My kids don’t wear them. Most sunglasses for kids are made with cheap plastic lenses that distort your eyesight so I feel like they are not good for their eyes. When I do buy them, they don’t wear them for too long anyway, probably for that reason.

Susan: Skylar has just started wanting to wear her sunglasses. She’ll keep them on for 15 minutes or so but refuses to wear them right side up… she makes her own style!

Christina: We don’t have specific sunglasses for the kids, but whenever I’m wearing mine, they want to steal them!

Jared: My daughter pretty much insists on sunglasses whenever it’s really bright out. I think the main reason she started was because she wanted to be like Mommy and Daddy, but now she wants to wear them whether or not we are. My 1-year-old son refuses to wear them, but he’ll come around.

Jane: Brooks has more pairs of sunglasses than I do. But I still have to keep reminding him to wear them.

Rashella: My 17-year-old wears them willingly, because she was able to find sunglasses that look good on her. My 15-year-old wears a pair too, which he thinks looks cool. My 10-year-old doesn’t like wearing them, he has three different pairs that look great, but he doesn’t like keeping them on—it’s kind of a nuisance for him. He thinks they get in the way of whatever sport activity he might be doing at that moment, whether it’s beach sports or bike riding—they come off quick.