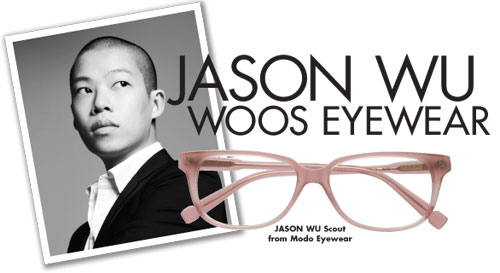 REFLECTIONS ON FASHION, FOOD, THE FIRST LADY AND THAT FAVORITE ACCESSORY—EYEWEAR.

At the age of five, Jason Wu accompanied his mother to bridal shops in his native Taipei so he could sketch the gowns in the windows. When he was nine, the family moved to Vancouver, British Columbia where he learned how to sew, draft patterns and sketch in fashion proportions by using dolls as mannequins. At 14, he studied sculpture in Tokyo and at 16 began designing doll clothing for the toy company, Integrity Toys, under the name “Jason Wu Dolls.” The following year he was named creative director of Integrity Toys.

But it wasn’t until he spent his senior year of high school studying in Rennes, France that Wu decided to become a fashion designer. To pursue his goal, he enrolled at Parsons School of Design in New York and later interned with Narciso Rodriguez before starting his ready-to-wear line in 2006 under the Jason Wu brand. Then, in 2009, a one-shouldered white gown custom designed by Wu caught the attention of the world when First Lady Michelle Obama appeared in it at the inaugural balls for President Barack Obama.

Although Wu, who is not yet 28, was already something of a fashion darling, winning the Fashion Group International’s Rising Star Award in January 2008 for Women’s Ready-to-Wear and later in the year was named one of the finalists in the CFDA/Vogue Fashion Fund, he readily acknowledges the tremendous impact Mrs. Obama has had on his company. She has also worn his designs on several other public occasions, including a “Barbara Walters Special” shortly before the November 2008 election, on the March 2009 cover of Vogue and during a visit with Queen Elizabeth II. “For a small, young, non-advertising company like ours, the exposure Mrs. Obama has given our clothes has been an enormous help,” Wu says. “The First Lady has had a unique effect on fashion worldwide in general that can’t be overestimated. She wears my designs, but she also wears clothes from other young designers as well as from established designers and such retailers as J. Crew,” he notes.

“What’s been really beneficial to me is that I have been able to releverage that exposure into my brand philosophy,” the designer continues. “Mrs. Obama is a source of inspiration to many young women and since she has been First Lady, I think there has been a change in how career women dress. Instead of being about strict suiting—uniform and masculine—there’s a sense that women can have a little more fun with fashion and still be taken seriously. They can embrace their femininity and do a great job at the same time. Michelle Obama has shown that fashion can be a really powerful message in itself. And it’s priceless to be a part of history.” The inaugural gown now hangs in the Smithsonian National Museum of American History’s First Ladies Collection.

Another way in which Wu is gaining exposure for his brand is through expanding into the accessories’ category—namely eyewear. In late 2009, he launched a sunglass collection, followed by an ophthalmic line earlier this year with New York-based Modo Eyewear.

“Eyewear seemed like a good step for me. My fashions are not trendy; they are about building a wardrobe. I wanted to put my stamp on an item that could be accessible to a broader market and with an inherently chic connotation. Iconic women throughout history have been identified with the sunglasses they wore,” he explains. “Actually, eyewear is our first step into the accessory market. Most designers start with shoes, but we started with sunglasses and now optical,” Wu notes. “I’m very pleased that Ilori [an eyewear boutique chain that started as a sunglass business and has recently introduced ophthalmic styles and offers prescription services for both eyeglasses and sunglasses nationwide] is showing my optical along with the sun. It makes sense to present them together. Design details are very similar in my two collections.” To emphasize the importance of optical, in his recent resort collection inspired by the ’60s, Wu featured ophthalmic styles on the runway. 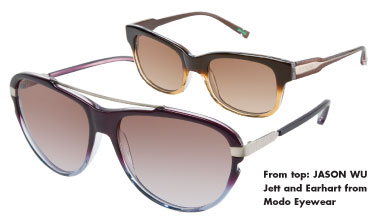 Wu partnered with Modo because he felt it was essential to collaborate with a company that shared his philosophy. “Modo is an excellent partner for a young brand like ours because they, like us, specialize in high-quality, well-designed boutique collections that emphasize attention to detail. Everything about our collection, from the packaging to the design itself, has to be special. To this end, we work very closely with Modo.”

Modo CEO Alessandro Lanaro agrees: “We are honored and very excited bout this collection. Jason is one of the most talented designers of our time. His use of luxurious fabrications, attention to details and youthful attitude fit perfectly with Modo’s product philosophy.”

Whether creating eyewear or clothes, Wu follows his philosophy of creating timeless, feminine styles with an edge, designing for modern women, who are strong, but not afraid to embrace their softer side. The eyewear reflects this attitude through gutsy, yet feminine shapes with textured metal details, translucent crystal tones, matte finishes and understated branding in fashion-forward, yet wearable shapes. The designer notes he likes working on eyewear because it gives him the opportunity to experiment with materials other than fabric.

Wu describes his own style as relaxed preppy and subtle. “I believe in subtlety, not big logos,” he says. “Gray is my favorite color, but only one shade of gray—a warm gray.”

For inspiration in designing his collections, Wu turns to architecture, people watching and history. “It’s important to know where a craft comes from in order to create it,” he notes. His travels also provide him with great sources of inspiration. He especially likes Tokyo, Beijing, Paris (for its romance) and London (for its energy). The designer recently returned from a trip to Uruguay, where he became fascinated with the local food and art. But even seemingly insignificant things can be inspirational, he says.

When asked what he would be if he were not a designer, Wu says without hesitation: “A chef. I love food. And creating food is really very much like creating fashion. You use all you senses to appreciate food. You eat first with your eyes, then with your mouth. With fashion, too, everything—from the appearance and feel of the initial invitation to the music and sound effects on the runway to the actual presentation of product—employs the senses. And both food and fashion require a great deal of precision.” The designer especially likes creating pastry—notably macaroons. “They come in a lot of colors and are very pretty to look at,” he says.

Wu’s advice to designers just starting in the business: “Designing and fashion have to be something you love. Fashion has a glamorous facade, but 90 percent of my time I’m working and trying to further my design sensibility.” He is doing just that, spending a lot of time at stores around the country developing ideas for specific customers and climates. And the accolades for this talented young designer continue. In June, Wu received the 2010 CFDA Fashion Award for Womenswear.