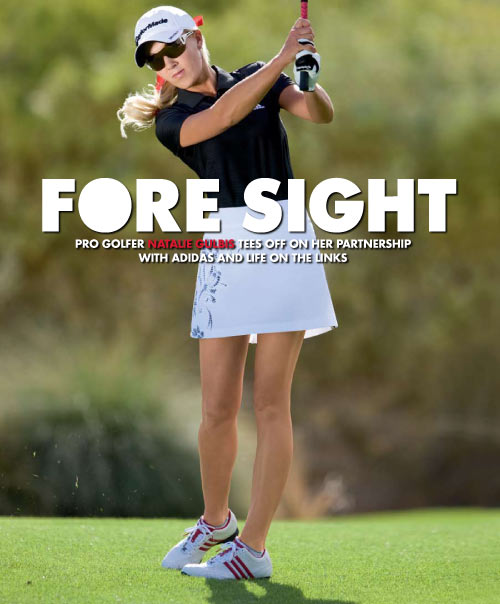 It’s a typical day for Natalie Gulbis. It began, like most, on the golf course practicing. Then she had lunch with one of her favorite charities, the Boys and Girls Clubs of America. And right now she is “doing a little media,” which in this case is talking to us here at 20/20. Finally, the day will end much in the way it began—practicing on the golf course. Such is the busy life of a professional golfer.
It is because her life is so busy and varied that Gulbis doesn’t have time to worry about the incidentals, like changing her sunglasses when she goes to and from the golf course. This is why her partnership with Adidas Eyewear has been so successful.

“When I’m done playing, I can wear the same pair of sunglasses for the rest of the day,” notes Gulbis. “They are really cute and fashionable, plus they are really light on the face.”

The golfer has not always worn sunwear on the fairway, but when she started getting headaches on the links in 2006, she decided it was time to give them a try. “I wanted to try out some sunglasses so I asked Adidas,” says Gulbis, who has been associated with the brand since 2001 (she also designed an Adidas shoe named after her). “I needed them to cover the face and still have performance qualities. I was wearing Chanel and other designer sunglasses off the course. Adidas and Silhouette [who has the license for Adidas] wanted my feedback so they told me to bring my favorite sunglasses to show them. They asked me what I wore off the golf course. I wanted the sunglasses to look good and perform well. I also needed dark enough lenses that helped me see better on the golf course when the sun was strong.”

Adidas was able to deliver her sunwear that was both performance-driven and fashionable. Gulbis was impressed and soon learned the importance of lens technology. “The Adidas lens uses a light stabilizing technology,” explains the golfer. “I was finding that with other sports performance glasses there was a bowl affect—a distortion. It made me dizzy when I went to hit the ball. The Adidas sunwear had a lens that was authentic. It didn’t change the integrity of what I was looking at.”

Whether she’s competing or practicing (or both), Gulbis can be out on the golf course for up to nine hours on a single day so lens technology that addresses a variety of light issues is critical. “There are times when I use frames that allow me to change the lens,” she explains. “When I play somewhere that’s overcast, like the British Open, I wear a lighter lens. When I play on the tour out west, like in Arizona, where the sun is very strong, I wear darker lenses. The studies don’t lie about eye fatigue and too much sun exposure. It’s so important to wear glasses on the golf course.”

Gulbis has spent a lot of time on the green. Born in Sacramento, Calif., she began playing golf at the age of four thanks to her father, who taught her how to hit the ball. “I loved playing golf with my dad,” she says. “I loved spending time with my dad and fell in love with the sport.” She won her first tournament when she was seven and at age 10, she first broke par. A few years later, at 14, she won the California State Women’s Amateur and became the youngest player to qualify for an LPGA event—the Longs Drug Challenge. 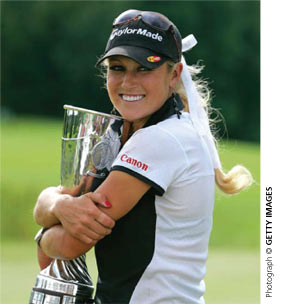 As a pro, Gulbis had her breakout season in 2005, finishing tied for third at the Michelob Ultra Open at Kingsmill and the State Farm Classic, earning more than $1 million for the first time in her career. Her first LPGA Tour victory came in 2007 at the Evian Masters, where she birdied the first hole of a sudden-death playoff.

While Gulbis stresses that her golf always comes first, she has been involved with a number of outside projects. She starred in her own reality TV series on the Golf Channel, has a line of fashion calendars and has teed off against such celebrity athletes as Derek Jeter, Michael Jordan and Jerome Bettis. She also appeared on the “Celebrity Apprentice” to raise money for her pet charity, the Boys and Girls Clubs. In fact, one of Gulbis’ philanthropic goals is to fund her own Boys and Girls Clubs—one in Sacramento and one in Las Vegas.

As a woman in professional sports, Gulbis says she has witnessed positive advances in the LPGA and women’s sports in general. “I think the barriers have really been falling down over the last 10 years. There wasn’t a girls’ golf team in my high school so I played on the boys’ team. Title IX has really made a difference. For example, with tennis, we’ve seen that the women are now making as much as the men. Women’s golf has also been growing in popularity. It’s fun to be part of that evolution.”

As her own career evolves, Natalie Gulbis’ main objective is to win one of the LPGA’s four major competitions. “I’d like to win a major,” she admits. “I’ve come close, but it’s not the same as winning.” And when she does, Adidas will be right there helping her keep her eyes clearly focused on the prize.