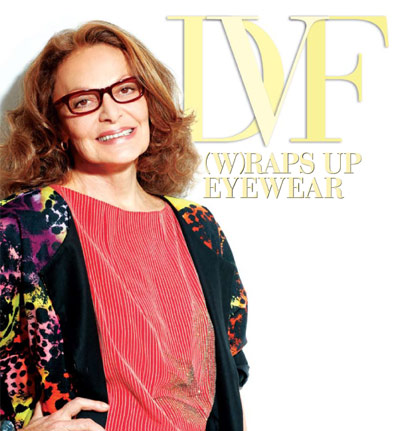 Photographed by Stephen Sullivan
Diane von Furstenberg, perhaps, best describes herself in words she used last fall at the 2009 ACE Awards when she presented the Fashion Icon Award to another legend, Barbie. In her speech, von Furstenberg says of the famous doll. “What do you need to be a fashion icon? You need legs, good legs. You need not to age or at least don’t show it. You need to love fashion. You need to be multi-faceted. Barbie always looks good. She’s had 108 careers—surgeon, astronaut, even a president. She loves fashion. She has worked with 120 fashion designers. She’s also a partner of the CFDA. She’s very generous. When she has a good year, she contributes to the CFDA and the scholarship fund. She’s a philanthropist. She’s hot. She loves every country… She’s pretty wonderful.”

Born in Belgium, von Furstenberg arrived in New York in 1972 with a suitcase full of wrap dresses. Four years later she needed a bigger suitcase. In 1976, five million wraps were sold—her name becoming synonymous with confidence and female freedom. The prior year, she created a fragrance and licensed her name to a full range of products, including eyewear, a license she had with Optique Du Monde from 1975 to 1993. Over the next decade, she pioneered fashion and business trends, built and sold a cosmetics company, launched a home collection and received the New York Mayor’s Liberty Medal for Citizens of the World Who Have Achieved the American Dream.

1975 Creates the fragrance Tatiana, named for her young daughter; licenses her name to a full range of products from eyewear to luggage

1985 Moves to Paris and founds Salvy, a French-language publishing house

2008 Featured in American Express “Are You a Card Member?” campaign; named to board of Vital Voices, a women’s leadership organization that trains and empowers emerging women leaders and social entrepreneurs around the world

After taking a hiatus from fashion, she reemerged on the New York scene in 1997 with the re-launch of that iconic dress. A new generation of women readily embraced her designs. The DVF collection has since evolved into a full line of ready-to-wear, including sportswear, eveningwear, dresses and accessories with 32 freestanding Diane von Furstenberg boutiques and distribution in more than 71 countries. Although the designer is constantly refining and redefining the DVF brand, she continues to support her original mantra: “To feel like a woman, wear a dress.”

Throughout the decades, von Furstenberg has always understood the enormous value of an eyewear license. She was one of the first designers/celebrities to have a branded eyewear collection and is now launching a collection of frames and sunglasses with Marchon Eyewear. “Eyewear is great because it functions as an accessory and a necessity—it’s both practical and appealing,” she notes. “And it touches so many generations, making it perfect for my brand because the wrap dress also crosses so many generations.”

Von Furstenberg says she has been wearing sunglasses since she was 17. “I never go out on the street without the protection of sunglasses, plus they are so glamorous. But I’ve only been wearing prescription eyewear for 10 or 15 years. And that is a very different experience. Prescription glasses are like makeup. Women need to experiment with them to see what works best for various looks and occasions.”

With glasses, as with all of her fashions, the designer wants them to be comfortable, functional, flattering and have a touch of humor. For example, in the eyewear collection, the wrap dress is interpreted with metal and plastic wrapped around the temples and the signature DVF lips are rendered in pink Swarovski crystals on a black sunglass. “Color is another element I try to put into all my products because it provides a sense of confidence,” von Furstenberg says. “And color translates well into eyewear.” Such hues as teal, lavender, plum and lots of red, favorite colors of von Furstenberg are predominant in the eyewear collection. She also has another expectation for her eyewear, just like she does for all her products. “I want Diane von Furstenberg glasses to become your best friend.”

Since the designer first began working with eyewear in the ’70s, there have been many positive changes, she says. “The choice of materials has greatly improved and all the advancements in technology allow us to apply many more design elements than we could in the past.”

Von Furstenberg is also very happy with her partnership with Marchon. “The minute I met Al Berg [president and CEO of Marchon Eyewear] and his team I loved them. We got to know and respect each other. It’s been great.”

The feeling is mutual. Says Berg: “Diane’s ability to make fashion effortless, free and symbolic for the wearer is coveted in the fashion industry. It is a great honor to bring this relevant global brand into our ever-expanding portfolio.”

Creating that effortless style is very important to von Furstenberg. “It creates an ease and a sense of confidence. There’s nothing more beautiful or sexier than a woman who is confident. My motto: Be yourself.” And that’s perhaps why her fashions have appealed to so many generations. “The older I get the younger my customers become,” she says. “I’m always pleased, but surprised by that. It’s fun. It keeps me young and makes me relevant.”

When asked why she thinks she is an icon to women of all ages, she responds: “Maybe it’s because I have become the woman I always wanted to become while helping women become the women they want to be. Women inspire me. It has always been my mission to empower women… because I wanted to be an empowered woman and I became one. Now I want to empower every woman. I do it through my clothes. Through my works. Through money. Through everything,” she says. “I respect women and I’m very respectful of their needs. I like to make women feel better. I like them to smile.”

Regarding how the fashion business has changed since she first arrived, von Furstenberg notes it’s more accessible. “Fashion is less dictatorial. Women are more selective and individualistic about what they pick now.”

Her advice to designers starting out: “You need to be clear on what you are doing and it needs to have a reason for being. Then go for it.”

If she were to change careers, she says she would like to be a film director. Then she says, “You know, I’ve just taken up photography. I’m doing the photography for my ad campaigns.” And she has taken up acting. In an ad for her eyewear, she drives a cab, picking up a passenger, who happens to be her daughter-in-law. She has also been and continues to be actively involved in saving New York’s High Line and supporting the development of the newly opened public park on the site of a former elevated freight railway.

And that’s the (w)rap on DVF. As she said about that other icon, Barbie, Diane von Furstenberg is also “pretty wonderful.”