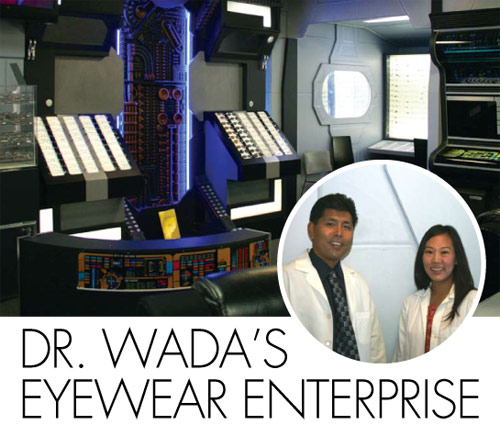 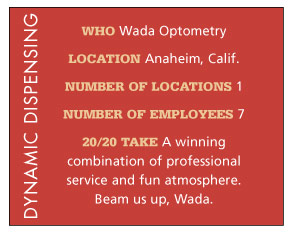 Dr. Garret Wada boldly goes where no optometrist has gone before… into the realm of a Star Trek-themed office located in Anaheim, Calif.  “I wanted to show people that an eye doctor doesn’t have to be in a regular office,” he says. “I try to make it fun and have creativity and imagination.” In addition to showcasing his own personal love for the world-famous television show, the décor offers Dr. Wada a way to connect with his patients, whether they’re human, Vulcan or Klingon. “I firmly believe that by making my office different and fun, it brings so many referrals because people say to me, ‘I gotta tell so-and-so about this office,’” he notes. “People walk around and touch things and sit in the chairs. They are so amazed to walk into an average-looking building and then see what it looks like this on the inside.”

After purchasing the practice in 1993 from its previous owner, Dr. Niizawa—who also happened to be Dr. Wada’s first eye doctor as a child—Dr. Wada bought new equipment and ran a “regular” office for about six months before he started to get bored. He began bringing in Star Trek memorabilia he had at home, placing things on counters and hanging models from the ceiling. A patient noticed the theme, introduced himself as a professional Hollywood set designer and offered to help expand on the idea. “He said he liked what I’d done and that we could do something further if I was interested,” says Dr. Wada. “We built this display for frames and it grew into a bigger thing where I kept adding to it every few months to a year.”

After buying his own building two-and-a-half-years ago and coming across other designers willing to help, Dr. Wada has turned his practice into a believable Star Trek experience. “When I purchased my own building, it sparked, ‘Well, you know what, I own the building now so I can renovate it and the improvements are mine and not someone else’s,’” he says. He even came into contact with an old prop manager for the Star Trek: Voyager series and was able to buy a Borg panel and some other accessories that were used on the set of the show and built the rest of the practice around it. Now he has a mini bridge area with comfortable seats for patients, a frame display area, a celestial ceiling, a control computer and a mounted television that plays—what else?—Star Trek episodes.

“Another thing I’m considering is adding an addition to the outside that will look like a shuttlecraft had crashed into the side of the building, so that might be my next project,” he notes. “But we’ll see.”

Overall, Dr. Wada has spent over $150,000 fixing up his office and building add-ons to the 1,600 square-foot space.  He has one other doctor, Dr. Kim Hoang, and five staffers to keep the office running smoothly. With a lens lab in the building, the practice is able to offer customers same-day turnaround on new pairs of glasses. “We do a lot of Transitions lenses and polycarbonate lenses, and we always keep those in stock,” says Dr. Wada. “Having that type of availability makes it easy for us to close a deal, because it convinces customers to go ahead and purchase new frames on the spot when they can have them the same day.”

With between 1,200 and 1,300 frames on display—from brands such as Christian Dior, Nine West, Juicy Couture, Ray-Ban, Coach and Rudy Project—Dr. Wada has a wide variety of options to offer his customers in an innovative dispensary area featuring wall boards, table cases, chairs and mirrors. He also makes sure his exam area features the latest technology to give customers the best service possible.

“To me, I honestly think it’s still possible to grow a practice in today’s market, you just have to use something to make yourself different and base yourself around technology,” he says. “That’s basically how I feel. Technology is out there and available to everyone, but I get so many people coming into my exam room saying, ‘My other doctor never had this kind of equipment.’”

Although his office isn’t (yet) recognizable from the outside as Star Trek-themed, Dr. Wada still relies on word-of-mouth advertising to increase his business instead of paying for large advertisements in phone books.

“When I first started my practice 16 years ago, that’s how optometry worked—whoever had the nicest ad in the Yellow Pages were who customers would call” he says. “But those ads can be expensive because every year you pay X price per month, per regional phone book. Pretty soon a little quarter-page ad costs a thousand dollars a month.” Now, with the Internet, people just look on the web for  the closest practice that accepts their insurance, adds Dr. Wada.

With that in mind, the practice has a web site: www.wadaoptometry.com, which keeps that Star Trek theme going. “I recently stopped all of my phone book advertising,” he says. “They stopped working because young people use the Internet.”

Of course, having an office that looks like the inside of a Star Trek spaceship helps to create a bit of a buzz about your practice. “We continue to increase our growth, though this economy always makes you worry about next year,” says Dr. Wada. “But the investment I put into this practice brings many referrals by people who get excited about the atmosphere from the moment they walk in. It makes me feel good that people like what I’ve done.”

With a professional attitude and a fun atmosphere, it’s safe to say that Wada  Optometry will live long and prosper.