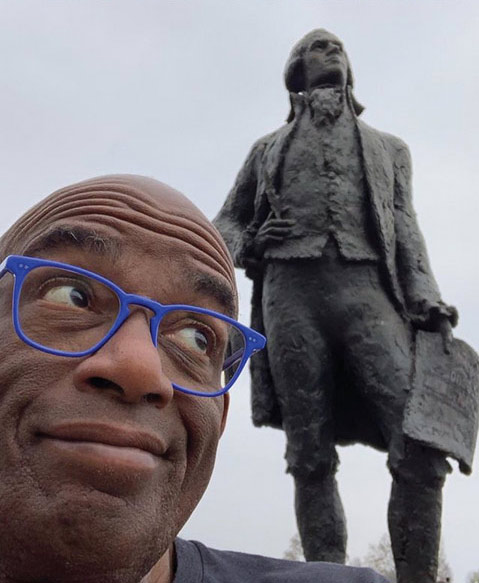 Every morning, Al Roker greets millions of viewers with his weather forecast wearing his trademark glasses. The “Today Show” co-host and weather anchor recently donned a bold new pair that launched a viral frenzy—an electric blue frame from DOM VETRO. Just days prior to its debut on the Today Show, Roker posted “selfies” of his new eyewear on Instagram in Paris with his family. Upon returning stateside and back on the show, the frame received such rave reviews from fans and colleagues, even his Today Show co-hosts each tried on their own pairs of electric blue Dom Vetro frames.

20/20 caught up with Roker about his newfound frame fame and his reasons for stepping outside his color comfort zone. “I like color but when it comes to glasses, I usually stick to the tried and true—maybe a tortoiseshell, a dark blue or dark green. I’ve never thought about something bright so my feeling was what’s the worst that can happen? But the response was just mind-blowing—I never saw it coming, so when people started responding, at first I thought it was a joke. But I think anything that stands out make people notice, and these glasses really stood out.” With all the enthusiastic reaction to the bright blue, Roker is excited to expand his color palette: “I like bright colors, and I’ve used them for accents—for a pocket square, my tie, a shirt, so why wouldn’t you do it with your glasses? We looked at yellow, purple, even red and orange. I guess my spirit animal when it comes to that is Spike Lee. Spike wears some wild colors with his glasses in some wild shapes. I don’t know that I can pull off the frame choices that Spike makes, but I think I can do the colors!”

Roker wears frame style Arthur, custom made for him in Dom Vetro’s Los Angeles studio by founder and designer Ashley Bezamat. All Dom Vetro frames are entirely handmade in LA and fully customizable, a personal touch accentuating their handcrafted luxury quality—attributes which the company prides itself on. Roker agrees: “You do feel better when you’re wearing a well-made pair of glasses. I think it’s something we take for granted, whether it’s a monogram or the lightness of it, or just a simple thing like the feeling of folding your glasses up—it speaks to the quality of the glasses.”

From bike rides in Central Park to an Alaska expedition exploring climate change, Roker has been documenting all his adventures in his signature new eyewear. Follow him on Instagram @alroker to see where he’s headed next… and what his next eyewear color choice might be.