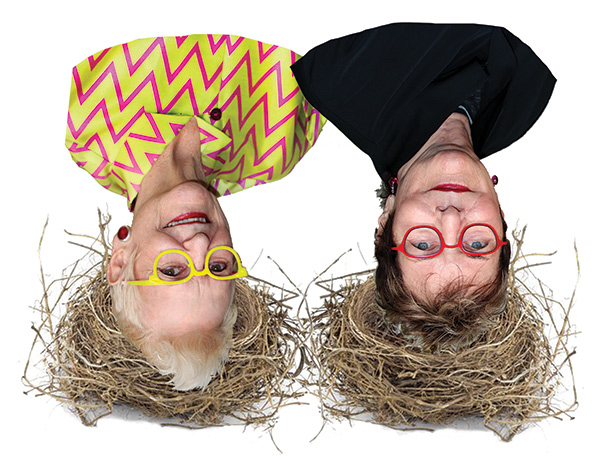 Barbara McReynolds always says, “Eyeglasses are the fashion, and everything else is the accessory.” You can probably imagine the look of surprise that appears on people’s faces when she makes that declaration, but for l.a.Eyeworks wearers and aficionados nothing else rings more true. Celebrating their 40th anniversary of being in business together this September, co-founders and co-designers Gai Gherardi and McReynolds have crafted bold eyewear through an organic and incredible journey together.

The duo have been best friends since they were teenagers growing up in the seaside community of Huntington Beach, Calif. Back then they didn’t dream of creating quirky and colorful eyeglasses—McReynolds was interested in the sciences, while Gherardi had a thing for architecture. Their lives together in eyewear was sort of a happy accident that began when the two needed summer jobs. McReynolds took the first job in an optical store and after a day of trying it out convinced Gherardi to join her. From her very first day, McReynolds knew there was something special for them there while it took Gherardi a bit more time to realize… three days to be exact. “The first time we put glasses on someone, you know you put your hands behind their temple, and you look them in the eye,” explains Gherardi. “It was incredible—some big connection was right there. We realized that this was going to be a vehicle for expression, and that’s how it happened. Right out of the gate we had all of this autonomy.”

On Sept. 9, 1979, they set up shop and opened a single storefront on Melrose Avenue in Los Angeles, and l.a.Eyeworks was born. The two shared a vision and a plan with endless explorations and possibilities. Gherardi jokes they also share a brain which even after all these years still doesn’t quite make sense to her because they are so completely different. “We are literally half a year apart, different signs of the horoscope; she’s a Capricorn and I’m a Cancer,” says Gherardi. (Capricorns are known for being practical, ambitious, wise, disciplined and patient, while Cancers are creative, spontaneous, emotional, hesitant and resilient.) “I think we just represent the other side of the personality of one another, and while it can be frustrating, it’s mostly incredibly magical. Barbara will say the things that I want to but maybe won’t. She will soften the sort of phantasmagorical side of myself and go there delightfully, but then always bring it back. We just spark things in one another.”

Being women in a mostly male-dominated industry could’ve been a deterrent to others at the time, but McReynolds and Gherardi couldn’t be stopped. They recognized there was head scratching and raised eyebrows at their ideas, and that became their fuel. The two simply didn’t allow the relationships they were forming in the industry to be gender biased. “We were just so sure of ourselves and so sure that we didn’t want those kinds of boxes around anything we were doing to get in the way,” explains Gherardi. “Sure, we could get less money at the bank than someone else, and did we get a smaller number of MOQs than others? Sure. But, did we pay our bills on time? Did we go back year after year? Yeah, we did.”

One of their goals was and still is to shift the paradigm that women’s glasses are women’s glasses, and men’s glasses are men’s glasses. They didn’t want to play into that framework, and it was very reflective and clear from the beginning. “We were motivated from the start to challenge the gender-biased assumptions about eyewear design,” says McReynolds. “Once we got going, l.a.Eyeworks became a platform to talk about issues of equality.” Gherardi adds, “We had strong ideas and opinions. We were out to build communities around what we did, and that’s what we tried to do. We didn’t try to be anybody but ourselves.” And it worked. Success followed and it gave the women independence. Their goal became, “Let’s have this success be freeing not confining. Because of this, it always brought around the possibilities for OK, what’s next?”

Back in 1981, when Gherardi and McReynolds had only one store on Melrose Avenue, they decided to take an advertisement in Interview magazine. In that moment, things just started to exponentially blow up. “I can still remember being on the corner in Soho in New York City, very early on walking down the street, and right there I saw three or four people wearing l.a.Eyeworks glasses,” recalls Gherardi. “I could cry right now remembering, but it was just such a feeling—like wow, something we made is here, it’s on the street. To see something you’ve created on someone’s face… it’s an extraordinary feeling.”

Looking back, that was really just the beginning. They began by creating frames for customers who are open and generous to being delighted by possibilities, and that is still their main objective. The two who still design each and every frame meet almost every morning to combine their creative minds. And that creativity comes at them in countless ways. “It could be great travel or great music that sparks something,” explains Gherardi. “Or it could be the shadow on some knob that you saw when you were driving down the street that piqued your interest and ignites a conversation.” While designs have evolved and changed over the years, l.a.Eyeworks has always focused on archetypal shapes and bright, vivid shades. “Barbara and I have turned appealing shapes and colors upside down and inside out,” says Gherardi. “Sometimes we actually start with the color. If you can put that color and transform it into a solid that would be a starting place that you can follow as a thread through our process.”

l.a.Eyeworks frames scream originality. They aren’t afraid to go there with funky patterns and bright colors that will always stand out. The designers have never been driven by trends and fashion, not to say that they don’t love them, but it isn’t something that has driven their creativity. “It’s always been more about a celebration of individuality and personal style,” says Gherardi. “Eyewear is kind of like amplifiers or receivers. It is such a vehicle for that expression.” This strong creativity extends into every part of their lives, but in different ways. While Gherardi’s home is eclectic, full and layered, McReynolds lives very minimally. And whereas McReynolds tries to change her frames every day, Gherardi has been cozy in a pair of bright yellow glasses for a while now.

The pair, who are also art collectors, don’t struggle with inspiration when designing their bold eyewear. “No one thing ever inspires Gai or me,” explains McReynolds. “Many things may inform us about the world, but we come to our best work from a deeply intuitive place.” They try to focus on optimism because they believe it’s their superpower that can take them out of a place of being stuck. While they pride themselves on being nimble in their production times, their goal is getting it right and creating beautiful pieces that people will wear every day. “As creators, that’s what it is,” says Gherardi. “It’s not this insular experience sitting in your studio making things. It’s about that landscape of the face and the culture of the people. And it’s humbling—they are living their life in something you made.”

Their ingenuity extends into all aspects of their work. Their ad campaigns, social media platforms and store shelves put their distinct, bold frames in focus. However, you might be surprised to hear they’ve never put an eyeglass frame in the window of their storefronts as the main feature. Instead, the duo has always used that space to focus on an idea or phrase they want to convey. “It’s sort of our window to the public that we’ve used to express ourselves,” says Gherardi. And you can imagine in almost 40 years what they’ve been able to say. On the day U.S. Congress swore in a record number of women this year, 127 to be exact, l.a.Eyeworks’ new window went up, and it said “Women Drivers.” Gherardi explains the double entendre, “The phrase has always been used against women negatively as ‘Oh, women drivers…’ Now we want the world to read it as ‘Well, women drivers!’ We’ve always spoken like that, and it’s a major component of our brand and brand philosophy.”

So what’s next for the ladies who have been working together for 40 years on their brightly colored eyewear pieces? A total 360. This March, McReynolds and Gherardi are launching a new brand, Fiction, by the House of l.a.Eyeworks, as featured on the cover of this 20/20 special issue. The goal of this new brand is to expand their vocabulary in a different direction from l.a.Eyeworks. Fiction is clean and more minimal than l.a.Eyeworks and hits a lower price point—making it more accessible to a younger demographic. While Fiction is in many ways a departure from l.a.Eyeworks, it is still nurtured in the same ways that you’ve come to know from the co-designers—specifically their attention to detail and the care that they put into everything they create.

What about the future of eyewear in general? Gherardi isn’t quite sure, but she does have a lot of hopes. She wants the industry to find possibilities and openings for new, young designers and let them take the baton. “I never care about their age, I just care that they have not been steeped in some sort of box that is dictating what they do,” she says. “I’d like to see those breakthroughs, and that we can make room—and as an industry we nurture them. And most importantly, I hope that you don’t need a trust fund to come have a seat at the table.”

When l.a.Eyeworks was born 40 years ago, McReynolds and Gherardi couldn’t have imagined all that they would come to accomplish. But then again, they can’t picture themselves doing anything else. “The opportunities and explorations we have experienced have been so endlessly satisfying and wonderful,” says Gherardi. “The hope when someone has a pair of our frames or is introduced to our glasses is they feel the story of l.a.Eyeworks—that they feel the goodness behind it. And most importantly, they feel the delight and the possibilities.” •