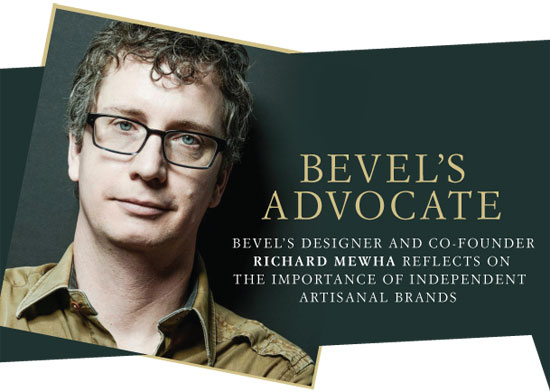 A British-born New Yorker, Richard Mewha became interested in fashion at an early age. “I always liked clothes, and because I have worn glasses since I was young, I was aware of their effect on the overall look.” But his introduction to the optical business was by chance. After receiving a degree in business from the International Business School in France, Mewha wanted to work in fashion or design at a small company, preferably in Italy (he was studying Italian at that time). He didn’t find work in Italy, but he did get a job with eyewear designer Alain Mikli as a sales rep in France. Within months, he was sent to New York by Mikli to do sales and in three years at the age of 24, he became national sales manager for Mikli. “It was the most difficult job I ever had, especially when I worked in France. At that point (in the late ’80s), most opticians weren’t willing to take any chances. They didn’t travel much, and they had a real stick-in-the-mud mentality,” he explains. “There were only a few creative or funky optical brands then: Mikli, l.a. Eyeworks, Robert LaRoche, Christian Roth, Oliver Peoples. But there were a group of us young Europeans who were living in New York and selling ‘this new type’ of eyewear. And we found customers who did ‘get the new eyewear’ and had fun with it. The boundaries were changing—almost like the punk era in music.” 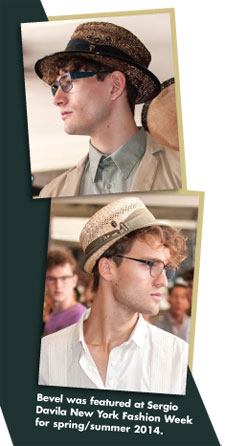 After leaving Mikli, Mewha moved on to Optical Shop of Aspen where he worked for 10 years on the Matsuda Eyewear brand and first started getting involved with the factories and understanding where the collection was going. “I wasn’t designing at that time, but that’s when I became really interested in the creative process. I knew that’s where I wanted to be eventually,” he says. “I liked everything about the Matsuda collection. It’s high quality product with minimalist design. That’s always been part of my design philosophy and part of the Bevel brand philosophy, although I do use more color than Matsuda, and Bevel design has a more modern orientation.”

While working at OSA, Mewha met Rick Nelson, who was also a sales rep. “We both wanted to start our own business and were just waiting for the right opportunity,” Mewha says. In 1999, they seized the opportunity and started Bevel Specs. “We had an idea of what we wanted to do,” Mewha explains. “But the brand didn’t take on a real identity until we had worked on three or four collections. As we became more confident with what we were doing, the eyewear began to take a definite shape. It’s essential with a brand that it be identifiable, that you can look at it and say ‘that’s a Bevel frame.’ But to remain fresh, it also has to continue to evolve. We didn’t start with a central theme or technology such as a specific type of hinge, but we have now added a patented beta hinge, which is important to us in terms of defining our brand. Not having a core idea to build the brand on makes it both harder—there’s no central idea to focus on—and easier. You are free to do what you want,” he continues.

A huge factor in the Bevel identity is color. “I love bold colors and design details that enhance rather than take over the look of a frame,” Mewha emphasizes. “We are starting to take more chances on even bolder, brighter colors because we feel our consumers are ready to have fun again.” Mewha’s favorite frame color is purple. “I think it’s a color that looks great on women. My favorite color for me is blue. I always like to have some blue in my eyewear.”

With Bevel, Mewha says he and Nelson tried not to limit themselves to any particular demographic. “We don’t want to pigeonhole our customer base. We see the Bevel customers as many different people of various ages,” he notes. Although in the beginning, Bevel found a niche in smaller sizes and shapes, it’s now moving toward somewhat larger designs and is reaching out to the Asian market with special-fit frames. “The real challenge with designing is to learn and grow as you go along, but still be true to yourself and know when to say ‘no, that won’t work for us.’ I think what sets Bevel apart is that it’s more of a cross between North American and European styles than many other brands. It has classic styling popular with North Americans mixed with a colorful, playful side inspired by European collections,” he continues.

For inspiration, Mewha turns to many different areas—furniture, architecture, modern art, traveling. He especially likes visiting Provence and Tuscany. “I like going places where I can meet and connect with people that are different from me,” he notes. Recently he bought a bag in Paris from A.G. Spalding. “The bag is a combination of leather and mesh with interesting buckles and closures. I’m using some of its elements in an eyeglass case I’m designing. It’s important to keep an open mind to everything around you,” he emphasizes.

Much like his eyewear, Mewha sees his personal sense of style as continually evolving. Interestingly though, he says the eyewear he wears today is similar to what he wore when he was a child in England. “We had four choices available from the National Health Service. I wore an acetate Wayfarer-inspired design with a keyhole bridge, similar to a frame we currently have in the Bevel collection.”

Mewha also describes his sense of style as “medium funky” and likes products with a twist, much like the bag he bought in Paris with the mix of materials and hardware. “I also want quality in everything I buy. I never look for bargains. I like independent brands that focus on handcrafted, artisanal products, not mass merchandise,” he emphasizes. “I like to buy locally when I buy food. And I view independent eyewear brands (20/20 dubs this category as Our Eyewear) rather than major designer brands similar to buying vegetables locally.”

He thinks it’s important to support and protect independent eyewear brands. “It’s feasible for us to establish a partnership with retailers and consumers in a way that’s impossible for larger corporations. Bevel doesn’t sell online because we believe we should work with independent, skilled opticians who know the eyewear and know how to fit it on individuals with various facial structures and skin tones,” Mewha adds. “We like working with ECPs who believe in our product, are passionate about it and convey their passion and excitement to the consumer. There is so much great product out there to get excited about. This is a very positive change from when I started in the business with Mikli. Some see it as competition, but I’m happy to see all these new small, independent companies. It’s great for the industry,” he stresses.

When he’s not working on the next eyewear collection, Mewha likes to golf and ski and is a huge soccer fan. He also spends time with his wife and three daughters in their weekend home, where he enjoys cutting down trees. And this brings him back to eyewear. “I have an ugly pair of safety glasses. We need good, attractive safety eyewear.” ■