Confession time: I can’t adjust my own glasses. That’s not to impugn my own abilities at fixing other people’s—I did just fine during many years of tinkering with temples and noodling nosepads. In all fairness, though, I never lived up to the Montgomery Scott-like abilities of my old colleague Dawn Gibbs at Texas State Optical in Magnolia, who could seemingly adjust a pair of frames that’d been run over by a semi and have them feeling even more comfortable than before the accident. When it comes to my own glasses, however, I’m rather like the master barber who can’t cut his own hair. They’re just too close, too personal, and I’m too finicky. 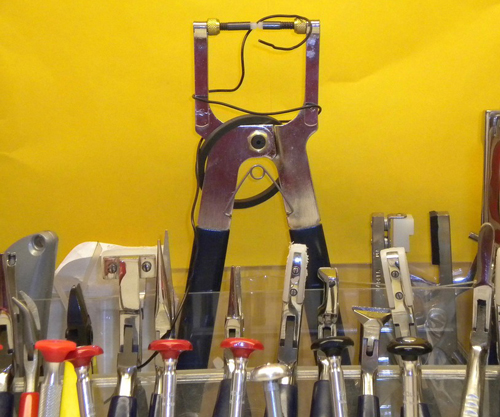 I was missing Dawn a great deal lately when, after many years of wearing the same frames, I found myself ordering a new pair in anticipation of my book launch (have I mentioned I’m a horror novelist? Long story). I’d wanted something new and distinct and found myself a pair of black and silver browlines in an identical model to a pair of frames I already owned, and which the aforementioned Ms. Gibbs had masterfully adjusted for me three years ago. The only problem was, Dawn was back in Houston, I’m in Dallas, and—thanks to a post office snafu—I only had 72 hours to get these frames adjusted before the momentous occasion. Normally, I’d have taken them to my current optometrist’s office to get them worked on, but, through another series of snafus, I found myself nominally confined to Fort Worth proper, while my OD is in downtown Dallas, and—being honest again—I value my cheapness over my vanity. I wasn’t going to shell out $30 for the Uber ride just to have my frames adjusted.

So it was that I found myself heading back to the boutique optical where I’d browsed frames and had an exam shortly after moving to Fort Worth a few years back. The practice is in a well-trafficked, upper-middle-class area of the city, and the doctor there is top-notch. For my purposes, they carry a number of high-end, high-dollar, European frames, and, based on the convergence of factors, it felt like a safe bet that they’d have expert craftspeople on hand to get my frames in the right shape. I brought in my new frames, as well as the identical model, perfectly adjusted old frames, and explained the situation (offering to pay, for the old-schoolers in the audience).

I watched in horror as the optician—without moving a foot away from me—began to push the nosepads back and forth with her thumbs, bend the temples without heating them, and otherwise treat the frames like a tangled mess of wires she was trying to get undone. No tools. No consideration of the frame. Unlike Dawn, who’d study a pair of glasses, have the patient don and doff them, use pliers and heaters and nosepad turners and things whose names I still don’t know to perfect a pair of specs, this optician in what’s easily a $1 mil a year practice just poked and prodded until… the frames didn’t fit.

After about 20 minutes of back-and-forth I lied that they were perfect and excused myself. Ultimately, it’s an object lesson in presentation and qualification. To the former—we’ve all cheated when it comes to adjustment and not used our tools when the answer was a quick and easy nudge of the nosepad. But, that doesn’t mean you want the patient to see that. Even if you’re that adept, or the adjustment doesn’t really require tools, at least give the illusion of doing your best rather than hover in front of the patient poking and prodding. To the latter—ODs, if you’re going to run a practice stocking $500, designer, European frames, make sure your staff is trained in adjustment worthy of your stock. You wouldn’t take your Mercedes to a mechanic who banged on the engine with a wrench and asked if that made your issues better. Adjustment is a learnable skill, but, it is a skill, and something that must be learned.

I’m writing this the morning of my great reading, and I’ll be wearing the old frames. Whatever—they look nice and, more importantly, they’re comfortable. And Dawn—I miss you.