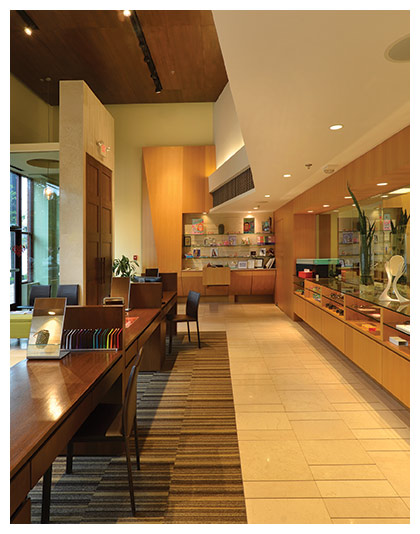 
MODA OPTIC AT A GLANCE:

OWNER: Maria Maestros, who was born in D.C., raised in Greece and returned to the U.S. at 18

WEBSITE: modaoptic.com
Let’s face it. Owning your own business can be a challenging gig. In fact, according to the Bureau of Labor Statistics, 50 percent of small businesses fail in the first four years. Somehow finding that magic formula of location, product mix and clientele is not as easy as many might have you believe.

But for Maria Maestros, the equation practically solved itself. By paring it down to the most essential components, the optical industry veteran was able to focus her attention on a very specific market niche: luxury eyewear for a referral-based clientele. “Ninety-nine percent of the people who walk through our door are coming in on a referral,” she says. “We don’t have a doctor on staff, we don’t have exam rooms, we don’t take insurance. We dispense and fit eyewear.”

Still, that’s no easy feat. To stay relevant in today’s retail environment, optical shops need to find a way to distinguish themselves, not only from the competition, but from the glut of Web-based and online resources—something Maestros has been doing for the last eight years by honing her networking, merchandising and marketing skills. Seventeen years on staff with a small optical retail chain taught Maestros how to pull all the pieces together, but there were lessons too in what she didn’t want to do. “Eventually it became the sort of thing where I had so many of my own ideas. Having to work with 15 other employees and two other managers created some confusion. So one fine day, I resigned. I took a year off, and then this.”

THIS is Moda Optic, a single location 1,200-square-foot storefront on the ground floor of an apartment building in Rockville, Md. “When I found this location, it was on the verge of being built,” says Maestros. “The area wasn’t crowded, it wasn’t near shopping malls or the kind of place people would walk by, but it had easy access and good parking—and the potential to build my shop exactly as I envisioned it.”

Maestros worked with architect Michael Marshall to create an interior space that treats the eyewear as works of art. “I spent too many years dusting shelves, and I despised the idea of racks and rows of frames,” she says. “I like everything to have its place.” The result is an interior design that carries the ambiance of a gallery. Using a unique system of tiered and stacked drawers, Maestro stores nearly her entire inventory of 700 frames out of sight. This is not the place for looky-loos. The clientele is not given the option to browse on its own; instead they are walked through their choices by Maestros or one of her two staff members. “We go through the frames together, with a great deal of guidance. That’s how I’ve always done it,” she says.

Maestros focuses on high-end independent brands, including Mykita, Matsuda, Gold & Wood, Bevel, Barton Perreira, Kirk & Kirk, l.a.Eyeworks, Frost, Francis Klein and ic! berlin. “I only work with independent lines and small companies,” she says. “I strongly believe that is the only way to do it.” Most of her referrals come from local doctors who trust their patients to her care. “They are happy when their patients are happy,” she adds. “They know I am here to help them.”

Moda Optic’s target customer is typically a young professional, though the shop also takes referrals from the pediatric ophthalmology department at Children’s Hospital. “We do get some young families and kids, but most of our clients are in their 30s and 40s,” she says. “The shop is close to North Bethesda, where there are a lot of new developments, and that often brings in younger professionals who are savvy about eyewear.” 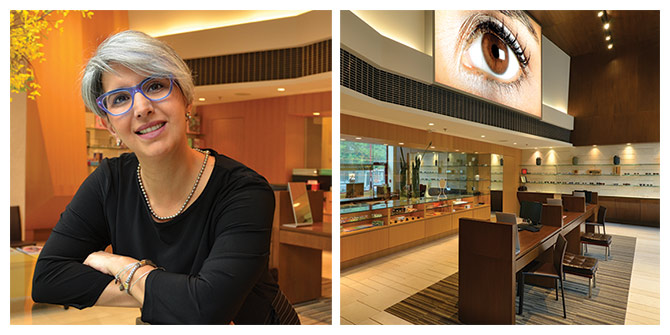 They are savvy too, about social media, something Maestros knew she needed to integrate into her marketing plan. “I never really understood it,” she says. “I would sometimes post photos of my kids or of a new recipe I was trying, but I didn’t know how to tie that platform into my business.” So she turned to a professional—Louis Fullagar and his company Spexaddict—for help. “Louis took over all my social media affairs and swiftly cleaned them up. He gently and astutely purified them and turned all my social media channels into a clean, professional, modern and stylish feed.”

The payoff was worth the effort. Maestros says that in less than a year on Instagram alone, her followers have jumped from 97 to 690. “People call the store and ask for certain styles, things they’ve seen in my feed. Before I started working with Spexaddict, I didn’t even understand how that was possible,” she says. “As independent optical professionals, we have to create a portal through which the younger generation is able to reach us. We have to educate and show them the beauty of our craft, and one of the only ways of doing that is through social media.”

For Maestros, it’s all part of the formula. “I find that what I offer to people, what I bring to the table, is a way of finding out something about themselves through eyewear and having a way to express that. Maybe no one has ever tried to show them they could wear a blue frame, or be a little more playful. But that’s what I do. I develop relationships with my clients. I love what I do. It’s just the best day every day.” ■

Where’d You Get Those Eyes?

Researchers used to think that eye color was determined by a single gene and followed a simple inheritance pattern in which brown eyes were dominant to blue eyes. However, later studies showed that this model was too simplistic. The inheritance of eye color is more complex than originally suspected because multiple genes are involved. Most of the genes associated with eye color are involved in the production, transport, or storage of the pigment melanin. Eye color is directly related to the amount and quality of melanin in the front layers of the iris. People with brown eyes have a large amount of melanin in the iris, while people with blue eyes have much less.