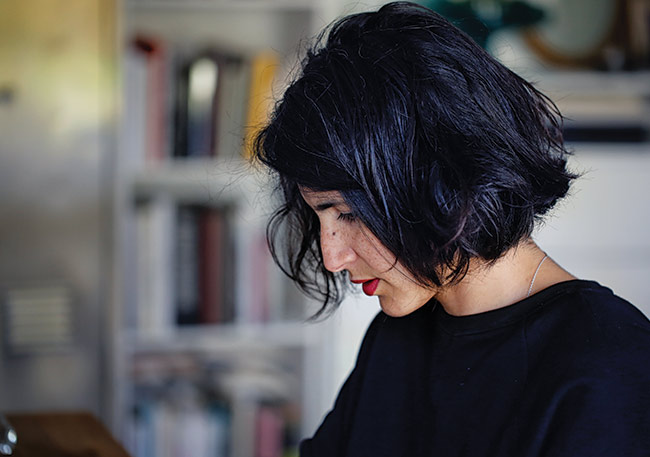 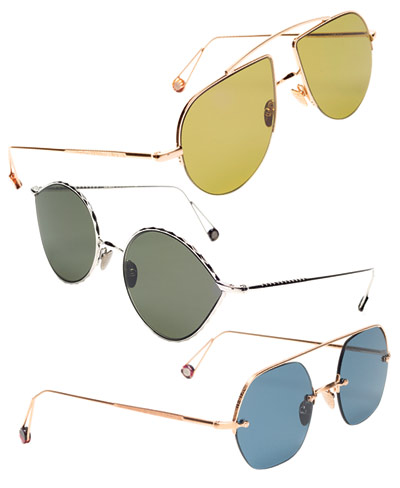 Walking the streets of Paris, you instantaneously sense an aura of sophistication. Its architecture, ambiance and residents enhance the detailed yet effortless impression this city evokes. Whether it’s your first time visiting this historic city or you’re a native Parisian, fashion, design and culture are present on every corner, every street and every cafe you encounter. It would be easy to find inspiration and creativity amongst this thriving metropolis, and that’s precisely how Ahlem Eyewear was founded.

Born and raised in Paris, Ahlem Manai-Platt was constantly surrounded by the energy and awe of the city. With a degree in history, she became a journalist and traveled often reporting the news. Although this profession was something she always dreamed of, she decided to make a major change and enter the fashion world. Once they began their presence in France, she joined the fashion house Acne, where she spent four years as a buyer. She then made her way to Prada, but left in 2012 to start her own consulting firm, Retailist and helped emerging French designers build their brands. Throughout these intense and prosperous years in the fashion world, Manai-Platt still had a dream in the back of her mind she couldn’t seem to shake. “I’m a real sunglasses fan,” says Manai-Platt. “I used to collect glasses when I was 5 years old, so it’s something that has been with me forever. But it never occurred to me that I could do something about it.” After an encouraging coffee date with friends where Manai-Platt presented her first eyewear sketch, the idea for Ahlem Eyewear manifested itself and never left.

With support from family and friends, Manai-Platt was on a mission to begin her journey into the eyewear world. She immediately started searching for French eyewear factories and drove several hours with her husband just to visit them. With no history in the eyewear industry, many factories were reluctant to create her pieces or even meet with her. “No one wanted to see me, no one wanted anything to do with me,” she says. “Everyone has a history and I didn’t.” Despite these hurdles, Manai-Platt was persistent in her quest for finding the perfect factory to create her first collection. She began visiting one specific factory on a monthly basis and creating relationships with the owners and employees while watching and learning about the production process. Eventually, the owner of the factory relented and agreed to create her first sketches. In 2014, after selecting precise Mazzucchelli acetates and certain color palettes, Manai-Platt saw her creations slowly coming to life with various prototypes from the factory in France. Around this time, she was also deciding how to get her product and name out into the industry when she wandered into the popular French retailer Colette. She began chatting with the sales clerk in the eyewear section and asking him various questions until he inquisitively asked if she had a brand of her own. “I had a leather blue case and I showed my prototypes, and people started coming over and trying them on,” she says. The sales clerk immediately wanted in on the action and asked Manai-Platt to contact him as soon as her stock was ready, and 10 days later her eponymous collection was set to be sold in Colette. “For four years we have been at Colette nonstop. The best thing is that Colette has been known for only doing consignments with brands but they didn’t do consignments with us. We were for four years the best-selling eyewear at Colette. It’s crazy.” Although Colette closed its doors last year, it’s safe to say this was the preliminary success for Ahlem Eyewear. During this time, she was living in the United States with her husband and continuously traveling back and forth to Paris for the brand. “So you understand, after that trip to Paris with my prototype, I felt amazing,” she says. “So we came back to the U.S. and I started calling people. I only had five frames at that time and five colors each. Everyone I sold to bought all of the frames in all of the colors.”

Some might say that Manai-Platt had a touch of luck when successfully selling her first set of frames. However, her enthusiasm and passion about her brand is evident in the way she speaks and designs each individual style. There is always a new idea forming in her mind about where to take Ahlem next, and there’s no telling what inspiration she will find. “The first month of my brand, we were sold out. I think it’s because we really are distinctive in terms of quality. The design is the design. It’s very subjective. You like it, or you don’t.” Her Parisian roots inspire the entire collection and focus on the city’s architecture, energy and people. Each frame is appropriately named after a Parisian train station, neighborhood or specific city street and represents its elegance and extreme attention to detail. Both sunglass and optical styles are entirely handcrafted in Oyonnax, France, with select vintage Mazzucchelli acetate and high-quality metals. Metal frames are electroplated in genuine gold and feature titanium nosepads that emit a sophisticated and sleek design. Frames feature Cridal lenses, which are also created in France by the optical company Christian Dalloz, and offer anti-reflective coating, a lightweight feel and a multitude of vivacious customized color options.

The intricate details each Ahlem frame features are astounding. Once you pick up a style, you’re immediately intrigued as to what it has to offer. With beveled temples, lustrous engravings and elaborate nosepad details, both the metal and acetate offerings are simple yet distinguishable, and there is always a new design element being discovered. Select metal frames feature the brand’s personal filigree on the temples, replicated with signature brow bars and nosepads that offer a personalized touch of luxury. Although the collection includes classic shapes such as the aviator, round and CatEye, there are several unique silhouettes quintessentially Ahlem. The Place des Alpes offers a distinctive leaf-like shape with twisted metal details while the Petit Pont, which was inspired by a bridge, offers a modified shield shape with no nose bridge and a floating brow bar. “The quality is not subjective. We really put so much detail and attention to every quality and every component we put into our glasses. I think that is the biggest difference for us.” The quality of each frame reverts back to the factories in France which Manai-Platt prides herself on. Although she is no longer working with the original factory that helped launch her brand, she has kept it local with another factory right next door creating both her acetate and metal collections. “The two owners are best friends, and they have been doing this for years. Everything is handmade, and it’s generation after generation. Me? I’m just a designer among 20 million others, but they are irreplaceable because their knowledge comes from grandfather to father, to son to daughter.” She visits this factory every few months to connect and maintain these relationships and make sure each of her designs is made with the highest qualities and attention to detail. 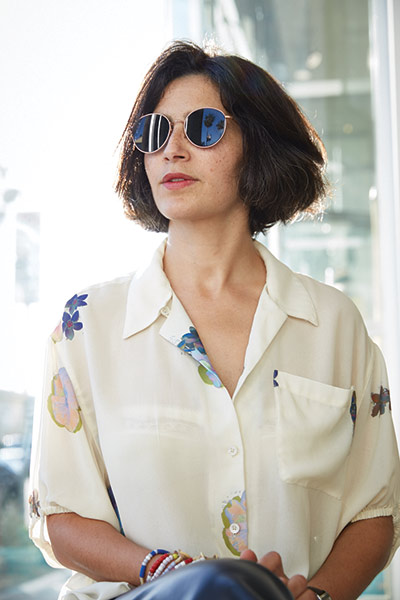 Manai-Platt offers styles in small batches and doesn’t design based on seasons, only when inspiration finds her. “Maybe I saw inspiring construction or maybe I was thinking about an artist that I love,” she says. “I think because we have so much freedom, and it’s a family-owned business that we can do it literally whenever we want. If today I design a frame, and I want to have it and put it in my store, then I just design it and it takes five months.” This on-the-go imagination and creativeness has been what Manai-Platt has relied on since the beginning of her brand but since the birth of her son two years ago, her design process has shifted quite a bit. On her way to an international trade show last year, she quickly designed 13 frames on her flight just in time to bring them to her factory, proving that inspiration can strike anywhere.

The past four years have been a whirlwind of achievement and change for Manai-Platt. Her family is now based in Venice, Calif., where the Ahlem Eyewear flagship store opened in 2016, and a second location in downtown Los Angeles shortly followed. While she now designs her frames in California, they are still produced in France with the utmost care and construction. In 2017, she had the honor of being nominated for the CFDA/Vogue Fashion Fund, which helps emerging designers find continued success in the fashion industry, and was the runner-up, winning $150,000 to put toward her brand. Celebrities are also discovering the luxurious, exclusive and authentic feel that Ahlem Eyewear brings to the forefront. Gigi Hadid, Selena Gomez, Karlie Kloss, Jessica Alba and Kendall Jenner have all been photographed wearing various styles from the brand, while Beyonce purchased two pairs of frames at Colette in Paris. Manai-Platt stays close to those who understand what her brand represents and the quality it offers. “We go with people who trust us and give us love. We are a very tiny company, and my team is very young. We really work with people we bond with and people that trust each other.” Selling specifically to those who appreciate and admire her brand is an attribute that has kept Ahlem Eyewear new and refreshing.

Besides creating new styles for the upcoming international trade shows, there are a few things on the horizon for Manai-Platt. Without giving too much away, she hinted at innovative new designs that her factories have never produced before for upcoming releases. As a huge fan of Leon Bridges, she has collaborated with the musician on a limited-edition pair of luxury sunglasses inspired by the singer’s new album. Only 50 pairs of this style will be released in September, with 70 percent of the proceeds going to a local school in Los Angeles. She is also hoping to design eyewear chains as additional accessories to her frames. “I love jewelry and I wear chains. I think we need to do a real chain for the frame collection.”

Although she has only been a part of the eyewear industry for a few years, Manai-Platt has the savoir-faire to take her collections to even greater heights. When asked what her career highlight has been since the inception of her brand, she answers with such heartfelt sincerity and enthusiasm, you can’t even begin to question why her brand has become so successful. “Everything is amazing. Everything has been so organic and easy-going,” she says. “I cannot highlight everything but I can only highlight my past four years with my company has been amazing.” Her creations unmistakably speak for themselves and radiate the successful yet effortless characteristics that Ahlem is all about. 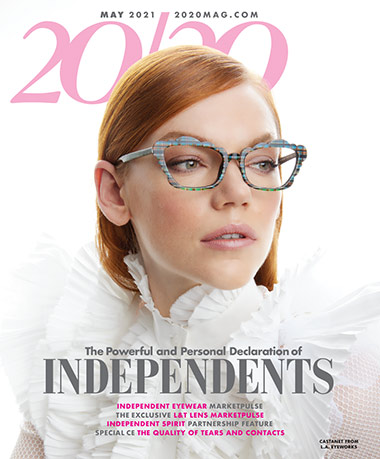