I’ve said it before, but it bears repeating: We’re living in the golden age of photochromics.

Even in the early 2010s, when I first began dispensing, attempting to sell a photochromic lens was something akin to a grand interrogation. I would lay out the benefits and advantages of a given lens, explaining why he or she may be interested in one; and then, the questions would come. “Does it get clear right away when I come in?” “Will it work in my car?” “Do they take the place of sunglasses?” And as I laid out the response to every inquiry, I inevitably found myself—through honesty, forthrightness and a good understanding of the product—talking patients out of the lenses. They wanted something that got clear right away; that worked in their cars; that was dark enough to function as a substitute for sunglasses. They wanted, in effect, the optical equivalent of a unicorn. While I could sell tinted lenses and polarized lenses, progressives and bifocals, poly and Trivex all day long, photochromics were a sure sale only to a very narrow demographic of my patients. Most of them were—to use a phrase coined by Transitions Optical to describe their first generation product, “comfort lenses.”

Photochromic lenses have gone through a remarkable development since Corning introduced its groundbreaking Photogray glass photochromics in the mid-1960s. Initially heavy, thick and not dark enough to properly function as sunwear, photochromics are now capable of fulfilling a variety of needs—and being comfortable, to boot. While Transitions is undeniably the manufacturer with the most brand recognition and largest market share, many newer opticians—as well as those who work in offices that primarily only sell Essilor product—might be surprised to learn that many other companies offer their own photochromic lenses, each with their own particulars and benefits—benefits that may aide certain patients with unique needs or desires. I’ve worn a few of these myself, in which case I’ll share my own experiences on the following pages, but for the most part this will be an objective overview of the various photochromic lenses currently available to you and your patients.

PARTY LIKE IT’S 2019
As someone who has worked in nearly every avenue of optics over a period of several years, it’s difficult for me to get terribly excited about something new—new frame lines, new progressives (well, maybe once I start wearing them), new dyes… For the first time in a long time, though, even the most jaded optician has a reason to look forward to a lens sample arriving in the mail. Thanks to the rich variety of new releases, we truly are living in a golden age for photochromics—and it’s a win-win situation for patients, ECPs and anyone else involved in the optical field. 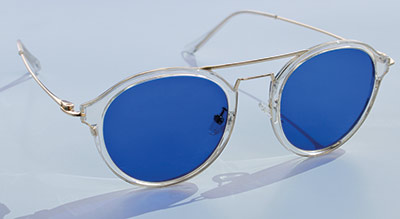 ZEISS PHOTOFUSION
In early 2018, Zeiss refreshed its Photofusion brand with the addition of several non-traditional photochromic lens colors: Extra Gray, Pioneer Green and Blue. (Zeiss still offers its original Photofusion Brown and Gray.) Zeiss’ Photofusion brown is a possible alternative to patients concerned with color coordination, as it has red undertones that make it suitable in either black or tortoise frames, ending those pesky “what color frames/what color lenses?” debates that arise when a patient who wants brown lenses can’t reconcile putting them in a non-brown frame. Their Blue Photofusion, meanwhile, is both soothing and affords adequate sun protection—a rarity for a cool hue in a lens.

According to Zeiss, the secret behind PhotoFusion technology is patented photo-active molecules that respond more efficiently to light energy, fading up to two times faster than other photochromic lenses. Outdoors, all Zeiss PhotoFusion lenses offer full protection against UV rays up to the 400 nm standard. Indoors, these same lenses provide two times more blue light protection than standard clear lenses. 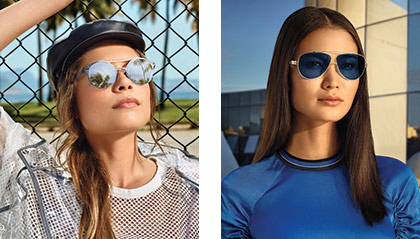 TRANSITIONS STYLE COLORS AND TRANSITIONS XTRACTIVE STYLE MIRRORS
Industry leader Transitions Optical has, of late, begun offering lenses that serve more than just the utilitarian purpose of shielding patients’ eyes from the sun, reducing glare, blocking UV light and filtering out harmful blue light, now allowing them to look good while they do it. Eighteen years after the introduction of their Splitz line, Transitions Optical has rediscovered a passion for fashion allowing wearers to express themselves, experience the world in a whole new way and achieve total color coordination with two new lines: Transitions Signature lenses style colors and Transitions XTRActive style mirrors. It’s all pretty much there in the name: Transitions Signature lenses style colors change from clear to either amethyst, sapphire, emerald or amber, while Transitions XTRActive style mirrors will change from a slight hue indoors to a full-blown mirror lens in either gold, silver, red, pink, blue or green. The former product will appear nominally to Millennial patients, especially those who spend appreciable enough time outdoors in the daylight that the lenses can function as a high-concept accessory. The latter product will nominally be enviable by your more sporting patients, as the mirror lenses provide both an added level of sun protection and give patients that particular extreme look favored by many outdoor athletes. 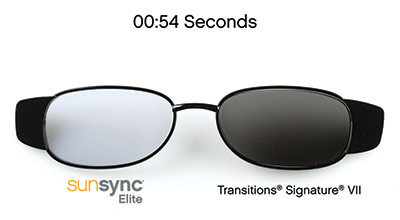 VSP SUNSYNC ELITE
If preliminary reports and videos coming in from the field are accurate, this product could represent a significant advance in photochromic technology. Per VSP, SunSync Elite lenses lighten within seconds, giving patients what VSP claims is the fastest fadeback speed on the market. In addition, the lenses offer “targeted blue-light filtration” and “exceptional outdoor darkness and indoor clarity.” It’s an exciting prospect, and one which should be a go to for any patient whose chief complaint about photochromics is the speed with which the lenses lighten indoors. In addition to Elite, VSP also offers SunSync Drive XT, a lens which darkens behind the windshield of cars, as well as SunSync Plus—another lens whose primary feature is a fast fadeback speed—and the classic SunSync lens, which VSP says is 20 percent less temperature sensitive than competing photochromics. 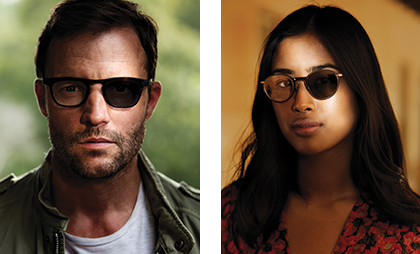 HOYA SENSITY
Hoya has been building its own market presence for years, offering exclusive products to independent eyecare practitioners to aid them in their battle against big-box and chain optical. As such, it’s only natural that the company would develop their own photochromics to compete with the market, which they’ve done in the form of Sensity. More recently, they’ve introduced two new photochromics: Sensity Dark, which darkens behind the windshield of an automobile, and Sensity Shine, which also activates behind a windshield and offers wearers a fashion-forward look with a mirror coating. Hoya’s proprietary Stablight Technology accounts for atmospheric conditions and allows the lenses to remain a consistent shade regardless of ambient temperature. As many patients will be using their lenses in a variety of environments—and seasons—it’s a potentially valuable feature that could give Hoya the edge when marketing photochromics to travelers, athletes and individuals who live in parts of North America with radical temperature changes between seasons.

DRIVEWEAR
Drivewear from Younger Optics has been slowly building a sort of cult of both personality and loyalty on the perimeter of the optical world for several years now. As the name indicates, the polarized lens is intended for wear while driving in a variety of bright lighting conditions, and unlike other photochromic lenses, is activated not only by UV light but visible light as well. Also unlike traditional photochromics which are clear indoors and darken in the presence of UV light, Drivewear lenses are never completely clear, changing from olive green in low lighting conditions to copper in bright light behind the wheel of a car, to a dark brown in bright, direct sunlight. The product of research conducted with both long haul truckers and race car drivers, Drivewear lenses are an excellent alternative to XTractive lenses for patients who want their lenses to remain consistently dark, as well as a polarized photochromic. The lenses are quite soothing to look through, and in my own experience offer a level of relaxation and sense of soothing that’s hard to come by in other photochromics—it’s most comparable to looking through a sepia lens.

Recently, Younger has upped their game by introducing the NuPolar series, a line of photochromics that expand upon the Drivewear concept with gray, brown, and gray and brown gradients. Always retaining some residual tint, the lenses will lighten or darken dependent upon both UV and direct light conditions, permitting between 35 to 9 percent light transmission. For the patient in want of constant sunwear, but for whom Drivewear’s color is off-putting, NuPolar has every base covered. 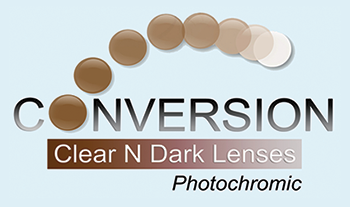 CONVERSIONS
Conversions is the photochromic brand of Super Optical, the innovators of the Fast Grind surfacing system. Geared toward opticians who work with patients in a lower income bracket, the lenses—currently only available in standard plastic—are an inexpensive but effective alternative to higher-priced brand-name lenses, available to opticians for as low as $12.98 a pair, and a must-have standby lens for those patients who want or need a photochromic but who are unable to afford them. Other than their price, Conversions’ other unique feature is a soothing blue undercurrent to their gray, which offers a degree of relaxation not normally found in non-brown or green photochromics. 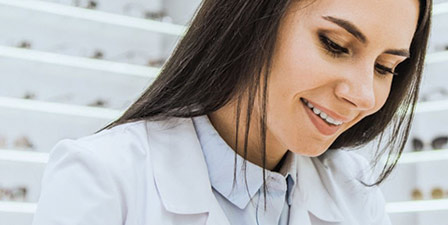 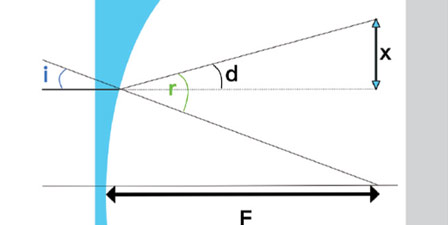 When Prentice’s Prism Rule Gets Unruly