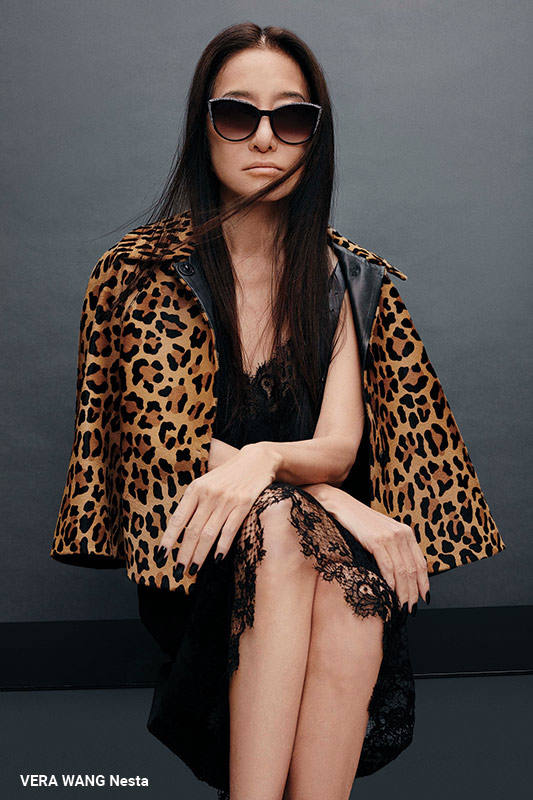 Vera Wang has always had a passion for eyewear. “I’m a collector; I probably have over 1,000 pairs of frames. Maybe more,” says the fashion designer. If that surprises you—it shouldn’t. Wang studies eyewear and notices every minute detail, fine-tuning her designs until they exceed her very high standards. She has partnered with Kenmark Eyewear since her initial eyewear collection launched in 2001, and she still somehow manages to keep us on our toes. Twenty years later, the designer adds model to her long resume after starring in her eyewear campaign for the first time.

Over the years, Wang has quite simply built an empire. Her designs span from her famed bridal and ready-to-wear collections to jewelry, home, eyewear, footwear, flowers, fragrance, a partnership with Men’s Wearhouse and a lucrative deal with Kohl’s, just to mention a few. As a designer with many different licensees under her belt, she still manages to be extremely hands on, putting her design touch on all of her products and bringing them to life. “I know it sounds very old-fashioned and not very efficient,” she says. “But, it is the real truth.”

Wang began her career in the industry at Vogue, becoming one of the magazine’s youngest fashion editors. As an accessories editor for almost 17 years, she worked with and studied eyewear on a daily basis. “It really was not what it became—what it evolved to be. Over the last 50 years eyewear has changed so much,” says Wang. After her days at Vogue, she was the design director for accessories at Ralph Lauren before embarking on the career move that would change her life. Wang opened her first bridal and eveningwear boutique in Manhattan, and shortly after launched her own collection, which picked up momentum fast. She dressed Hollywood from the very beginning, but her bridal designs really took off. “I don’t even know how it went that fast, that trajectory. But it did,” she recalls.

“I love doing bridal because it gives me a chance to create a fantasy that I cannot create in the same way with ready-to-wear,” says Wang. “It’s very different. Ready-to-wear is more about lifestyle and styling, and a sort of hipness. Wedding for me is this other world that I can go into that’s more theatrical, and I can flex different muscles.” And eyewear? “That portion of my business, which for a very long time, was always about what I thought was missing from the eyewear that I collected. It’s always been about bringing new things to the table.”

It is clear that Wang is not just in eyewear for the license. She knows it. She knows all of the players and has designed with some of the best in the industry. She brings her vision and style to life, but still prioritizes technicality and comfort. “I always joke, it’s such a little area of the face, but if people understood how much work goes into the width of the temple or the bridge,” says Wang. “Is there a bridge? How do the lenses attach, are they flat, are they curved?” Hinges are also an incredibly important design detail to her technically. “I mean if the hinges aren’t beautifully made and beautifully executed, no matter how good looking the eyewear is, no matter how flattering, no matter how cool, no matter how editorial—they just don’t work. If they don’t stay on your face, they don’t work.”

Mirrors line the tables of her eyewear meetings, and Wang tries on every single frame she designs. “I think it’s one of the most insane accessories,” she says. “It is so creative, so personal. For people to be able to transform themselves and enjoy their own creativity and experiment. I just think it’s such a fun thing.” She believes eyewear is one of the most significant accessible accessories for both men and women of all ages. “It’s like a new hairdo, a new lipstick, a new eyeshadow. That is the cosmetic creativity of eyewear that I love so much. It changes the shape of your face.” 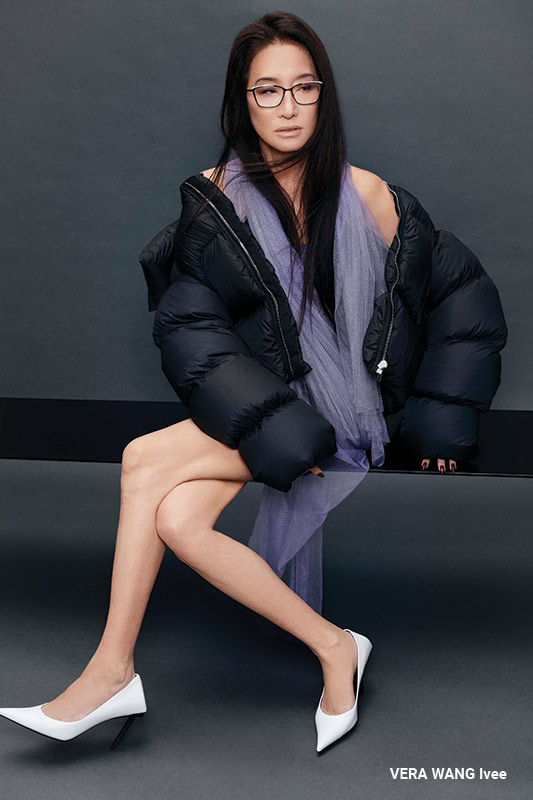 Wang became a household name for her iconic wedding gowns, but she has also been designing her ready-to-wear line for over 30 years. Her bridal designs are whimsical, wispy and fantasy driven. Her clothing collections are versatile, femininely bold and edgy. “I don’t know a woman designer whose own personal style doesn’t affect her work,” she says. “I’ve always said for male designers, I think designing for women is always abstract. They usually have a muse or some woman in their life that influences them. For women designers, it is a very different journey. We are our brand. I think what we do very much reflects how we feel and how we dress.”

In Wang’s personal case, she believes there is sometimes a bit of confusion because she does not run around Manhattan in wedding gowns. Her personal style is often viewed as luxury streetwear. She describes it as “athleisure before there was athleisure” from working in a studio for so many years. She loves good T-shirts, leggings and showing off her body that she is hyperaware of because she was a figure skater for 15 years and a ballet dancer for nine. It is just part of her DNA.

Doing things a bit differently this season, Wang fuses ready-to-wear with bridal as a single concept for spring 2021. Highlighting what is hidden versus what is revealed, the collection mixes materials and showcases masterful tailoring and deconstructionism into one coherent fashion statement. “This season seemed like the perfect moment to explore that objective,” says Wang. “Sensuality and seduction with a severe but feminine take on tailoring and boyish sporty separates. Black, ivory and nude still remain at the core of this palette with continued floral punctuations, however this time, often veiled in tulle. Ropes of hand-knotted glass pearls are also cocooned between layers of sheer fabric. Edgy romance. These are clothes that can be worn in myriad ways and styled up or down.”

This spring’s eyewear collection follows suit with both feminine and masculine shapes, colors and materials mixed by lamination or layering, and prominent crystal embellishments. The palette plays on Wang’s use of grounded neutrals and dark floral touches. This spring is clearly all about making a statement.

The eyewear campaign continues that trend of mixing things up this season. Shot in her New York City apartment, Wang modeled her latest eyewear pieces and styled herself in most of her own designs. Her team had never done this before, as they normally shoot campaigns in studio on models. The photo shoots typically center on her ready-to-wear clothing designs, and eyewear is added in for the frame campaign images. “This time we worked around the eyewear so every look was put together around the frame,” says Wang. “Instead of the eyewear being the accessory to the clothing, we made the clothing the accessory to the eyewear.” She wanted this ad campaign to be a refreshing new take that strayed from the usual three-quarter eyewear shots. Wang wanted to show eyewear in the context of fashion—her fashion in this case, for the most part. “I thought that was the most important thing,” she explains. “I thought that this was the time, not to see eyewear as a separate cropped image. I made it about the composition of the clothing with the eyewear. It’s just a new take to look at eyewear in a different context.”

Wang’s goal was not only to show the eyewear, whether it was ophthalmic or sunwear, in the context of editorial styling, but to also show how creative and transformative the accessory is. “So I changed hairstyles, I changed clothing,” she says. “I gave, I hope, a personality to every picture. I just really wanted people to look at and understand the versatility of eyewear. Anyone can do whatever they want with their eyewear. It is so nice to give people that permission to have fun and enjoy the looks they can create with their own wardrobes. I just think it’s very much about creating a personality with eyewear.”

Wang wants to convey her belief that there are not any limitations in eyewear anymore, and she is amazed by how the industry evolves each season. “It is part of your wardrobe. It’s part of your life,” she says. “It can be very whimsical, it can be very sophisticated, it can be just plain beautiful and mysterious like Jackie Kennedy was. I feel very lucky to be able to do eyewear, because I think it makes such a contribution creatively.”

Wang is one of the most multifaceted designers in the fashion industry today. She is the weekend warrior who spends her free time golfing and playing tennis. She is the ex-fashion editor who became a stylist and designer. She cares deeply about every item that bears her name. “I think what is really interesting for me is I’ve never lost my passion, or my curiosity, or my enthusiasm for design,” she says. “It really is my life. It is not even a chosen vocation, it is my life.” One thing that is certainly clear? Wang and that deep passion for design will continue to keep us guessing at what her next move will be.■