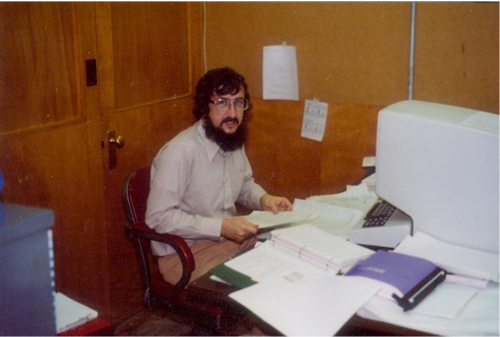 As an Engineer, I recall in the late 1970s being pleased to have a TI 99 desktop Calculator at my disposal. It was a powerful scientific calculator, but was memorable because it included a programmable magnetic strip. This permitted lens design/power calculation programs to be read into the calculator and subsequently executed. It was handy to have and helped as it was something engineers could bring to and use in offices and on the shop floor. The magnetic strip allowed programs to run calculations where prompting for variable input was possible.

For more serious computations, AO gravitated toward Mainframe terminals. This photo is in 1983, and shows Jim Duzslak at the terminal. He was the primary scientist who worked with Dr. John Winthrop and provided design support by programming many of the AO Progressive Lens designs including Ultravue, Truvision, OMNI, and AO Pro lenses. 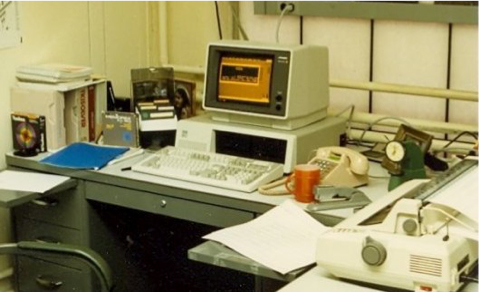 A variety of calculators and computing devices were used at AO, but my career was greatly influenced when I went to Boston in 1981 for the premier of the IBM PC. At that time, it was primitive, and early models eventually had a small hard drive that were so delicate that special attention was needed to “park the drive” if moved from one desk to another. Input was initially on 5 ¼ floppy disk drives. Other devices from Digital, HP, and Mac were used in various departments as well.

The decision to use IBM PC’s in the lens design department was made by my boss and mentor, Dave LaMarre, who judged that it was most suitable for our use. Early programming on the PC utilized Turbo Pascal, and I learned to program aspheric lens design work on this. AO’s aspheric single vision lens designs, Aspherlite and AO 55 lens series, were both achieved using this combination of hardware/software which was a great experience for me. The photo of the messy desk in my office shows the IBM PC XT that I used in the late 1980s.

Of course, we now have computing power that has advanced significantly since then. It amazes me however, to consider what was achieved in lens design prior to the advent of today’s computers that we now take for granted!