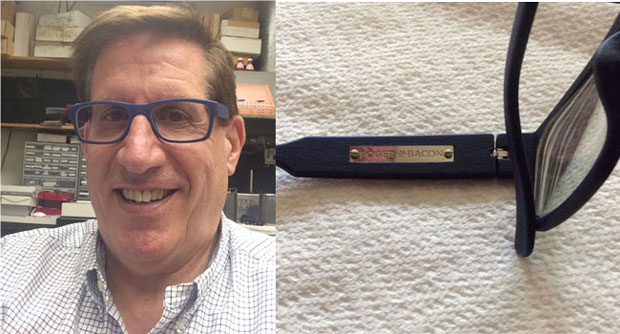 Technology-driven change has been impacting the optical field for years. From smartphone auto refractors to Optos imaging, it's "out with the old and in with the new!" But despite the onward march of new tech, the ins and outs of choosing and fitting frames has hardly been impacted at all. Sure, virtual try on (VTO) frame technology popped up...but it also popped back. It seemed safe to say that the gold standard of in-person try on, consultation and frame fitting would never be surpassed.

A few months ago, I was granted the privilege of being fitted with a new 3D printed frame technology made by Roger Bacon Eyewear of The Netherlands. Here's how it went:

I supplied my current Rx, specified the material and treatments desired for progressives, and promptly forgot about it. Weeks later, I was contacted by the new distribution agent for North America, Joe Zewe, who advised me my frame had arrived from Roger Bacon. Joe's lab would make the lenses, and he wanted to know if I wanted to supply or review the measurements the app had taken. "No" I responded. "Go with the app's values."

A week later my new Roger Bacon Eyewear arrived. I took it out of the box and put it on.

WHAM! They fit. And damn near perfectly.

I decided right then not to fiddle or adjust them. I would simply wear them as they arrived. And I wouldn't inspect them or verify them with instrumentation. I would do my evaluation completely by the seat of my pants. Here's my report:

Oh, did I mention that the frame was 3D printed exactly to the contours of my head, including different length-to-bend values for each temple? Remember, this whole process really did not require a traditional optician's input. Scary. And this is only v1.0. Take a look at the accompanying pics and see for yourself.

Barry Santini, ABOM, graduated from New York Technical College in 1975 with an AAS in Ophthalmic Dispensing. He is a New York State licensed optician with contact lens certification, is ABO certified and was awarded an ABO Master in 1994. As sales manager for Tele Vue Optics from 1987 to 2003, Santini developed his knowledge of precision optics and has been an owner of Long Island Opticians in Seaford N.Y., from 1996 to present. In addition, Santini is an amatuer astronomer and lecturer and plays bass trombone in the Brooklyn Symphony.