DESIGNER WES GORDON DISCUSSES HIS JOURNEY TO CAROLINA HERRERA AND TELLS FASHION EDITOR VICTORIA GARCIA HOW THE BRAND’S NEW EYEWEAR COLLECTION IS AN ODE TO ITS PAST, PRESENT AND FUTURE 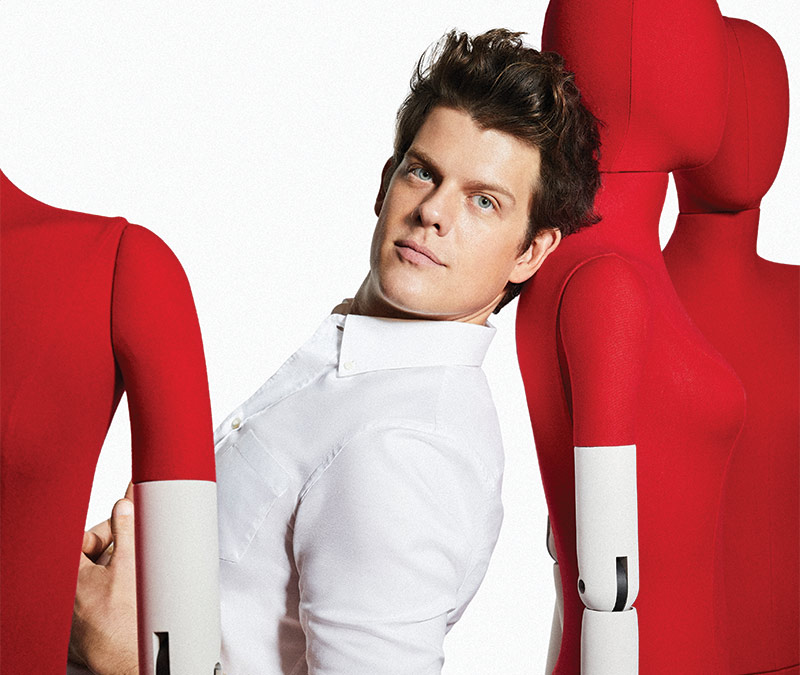 Wes Gordon loves a good celebration. Whether that’s reveling in the glamour of the fashion industry or celebrating a successful runway show at New York Fashion Week, Gordon’s mission is to emit positivity and joy into all he does. As creative director of Carolina Herrera, Gordon is taking the distinguished brand to new heights, while maintaining the signature style and elegance the House of Herrera has instilled into the world of fashion.

Before creating her namesake label in 1981, Carolina Herrera was already a well-known fashion icon in the social scene of New York City. In 1980, she joined the International Best Dressed Hall of Fame and a year later debuted her first ready-to-wear collection, which successfully launched her career. From then on, the Carolina Herrera brand has expanded into bridal, fragrance, a lifestyle collection CH Carolina Herrera, beauty and of course, eyewear. In 2000, the first Carolina Herrera flagship store opened on Madison Avenue in Manhattan in a four-story landmark building. Over the years, the New York-based fashion label has been honored and revered for its feminine designs with countless accolades. In 2004, Herrera received the Council of Fashion Designers of America’s (CFDA) Womenswear Designer of the Year award and the “Glamour” Woman of the Year award. In 2008, the CFDA honored her with the Geoffrey Beene Lifetime Achievement Award. Her polished and elegant designs have been worn by several First Ladies including Michelle Obama, Laura Bush and Jacqueline Kennedy Onassis, while her couture bridal gowns have been worn by celebrities such as Jessica Simpson, Emmy Rossum and Christina Hendricks.

After 37 years at the helm of the House of Herrera, the Venezuelan-born designer took her final bow after showcasing her fall 2018 collection at the Museum of Modern Art (MoMA) in NYC. She immediately appointed designer Wes Gordon as her predecessor and the new creative director of her namesake brand. Fast forward four years, and Gordon is prepping for the upcoming season amidst a global pandemic. So how exactly did he get here?

Gordon was raised in Atlanta and attended the world-renowned Central Saint Martins College of Arts and Design in London, where fellow designers Stella McCartney, Zac Posen and Alexander McQueen all studied. After graduation in 2009, Gordon moved to New York City and established his self-named women’s wear line. “For seven years, prior to being at Herrera, I did my own collection,” says Gordon. “I’m extraordinarily grateful for that experience and time because being a small brand and building a brand from scratch, I was exposed to every element of the business. I touched the product and was with the product at every stage. I think that journey really taught me so much about not only being a designer, but about the women who are wearing our products.” The Wes Gordon collection was featured in high-end department stores such as Saks Fifth Avenue, Harrods and Bergdorf Goodman. Gordon presented the collection from 2010 to 2016 with his designs being worn by Michelle Obama and Gwyneth Paltrow, among many other celebrities. In 2017, Gordon decided to take a break from his collection and consult for Herrera. “I was lucky to be able to spend a year working very closely with her,” says Gordon. “At the end of that year, she let it be known that she was stepping down and becoming a brand ambassador for the house. I became creative director and have been for four years now.” 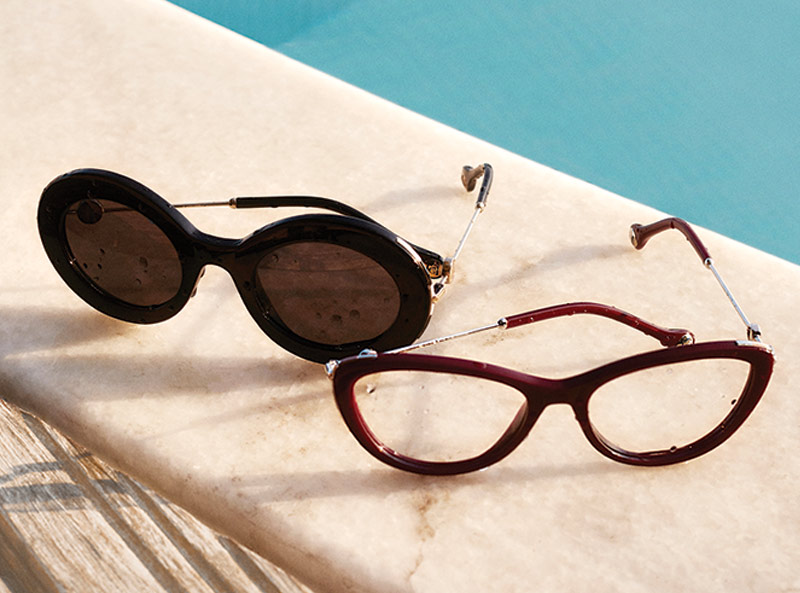 Gordon’s journey to Carolina Herrera seems almost like kismet. He was contacted by Emilie Rubinfeld, the current president of Carolina Herrera, about the possibility of doing consulting work with the house. After a few meetings with other members of the company, Gordon had a final meeting with Herrera herself. “I met her briefly and socially at events in New York, but I never sat and spent significant time with her, especially in this context,” he explains. “I remember coming to the office and walking down the hallway to her corner suite and sitting with her and spending an hour chatting. What was so beautiful is that we spent five minutes, if that, talking about the nature of the job, the collection, the company and fashion, and I think we spent another 45 minutes just talking about life… about the books we like, the television shows we were watching, our dogs, our families and the restaurants we like. To me, that’s so symbolic of everything about this house, what she values and what I value as well.”

Gordon and Mrs. Herrera (as Gordon fondly refers to the former designer) have formed a unique trust and bond that has carried over into the brand itself. During his time as creative director, Gordon has been insistent on maintaining and channeling the core values and designs of the brand. “I really created brand codes around color, joy, energy and boldness while very much adoring, respecting and revering the DNA of this house. It’s this idea that is beyond the product. My goal—whether it’s while I am working on accessories, fragrance, ready-to-wear or eyewear—is always to create and celebrate beauty, and the House of Herrera exists to bring beauty to the world and emphasize and celebrate the joy of living.”

The House of Herrera’s classic motifs and design elements such as elegant silhouettes, bright colors and bold prints have all been translated into its new women’s eyewear collection. Distributed by Safilo, the optical and sunwear styles represent the essence of the brand with a joyful and feminine aesthetic. Frames are constructed of acetate and metal or a combination of the two, and shapes include CatEye, butterfly and square that all convey a classic yet contemporary feel. Each style is personalized by a shiny tag with the iconic red monogram CH logo or by a round 3D insert with the monogram on the temple tips. “Our main ideas of boldness, that was something that I wanted on every piece the same way I approach clothes. We are not in the business of making generic clothes, nor are we here to just make generic eyewear. Everything needs to be extraordinary—a special piece that you’re excited to have and integrate into your life.”

Those familiar with the Carolina Herrera brand are well-versed in the design details that have been part of the house’s aesthetic since its inception. Polka dots, stripes and pearls are three of these signature details seen in various interpretations throughout the eyewear collection. “I sought to filter and edit down what are the core elements that carry through season over season and my Herrera brand codes that could translate to eyewear,” explains Gordon. “I broke them into groups, and it’s the idea of pearls, which is if you go back to the very beginning of the company in 1981, there has always been this idea of pearls. The signature print of the house is a polka dot, and every season I have different iterations of it. Another pattern that is very much Herrera are stripes and the beautiful techniques of making the stripes by layering different materials, textures and colors.” All these details are integrated in different ways throughout the optical and sunglass styles. Sophisticated pearl embellishments can be found on the frame fronts, end tips and temples, and various polka dot prints are incorporated on the metal wire cores on the temples. The stripe patterns are interpreted in several ways and can be seen in a metal element on the temples, on the metal rims or the frame fronts of acetate. The collection is broken into two segments, essential and seasonal. The essential line features easy-to-wear shapes that are all optician-friendly with frames offering a comfortable fit with double sizes on key styles. The seasonal line is fashion-driven and inspired by luxurious seasonal brand codes that offer disruptive designs and precious details.

The spring/summer 2022 launch is comprised of two releases, one in January and one in April. The initial January launch featured 23 optical styles and 12 sunglass styles, while the April launch will feature nine optical styles and five sunglass styles. In addition to the well-known brand codes of stripes, pearls and polka dots, there are even more design details that lend themselves to the collection. Rich and luxurious details such as iconic logo detailing, colorblocked acetate, enameled embellishments and architectural silhouettes are common factors in the new styles. “There is a timeless sophistication there that is very on brand for Herrera. In general, the collection offers a lot of styles that are both elegant and subtle at the same time. They are always personalized by a special detail such as the iconic red monogram that is a very important color to Herrera.” The brand has created a campaign dedicated to the spring/summer 2022 eyewear collection titled “Fun in the Sun,” which was shot by fashion photographer Dario Catellani. The campaign takes place poolside on the Cote d’Azur in France and features sophisticated images that represent the personality of Carolina Herrera while balancing between classic and contemporary elegance.

The new eyewear collection is a perfect example of Gordon’s innate awareness of what women are searching for when it comes to fashion and accessories. He creates products that are a cause for celebration with unparalleled authenticity. “I think we can continue to blaze a trail of a message of beauty, joy and happiness. We’ve never been more needed and necessary in the world, and I think each day we find new and bigger ways to globally tell our story.” It’s safe to say that the future of Carolina Herrera has certainly been put into good hands. ■